[specialbox]Note: This is a guest post by Ali Luke. Ali has been writing for a living for eight years, and she blogs weekly about the art, craft, and business of writing on her site Aliventures.[/specialbox]

You’re at your desk, and the words just aren’t flowing. You feel like getting up and walking away from your writing… and never coming back. However much you love writing, it’s hard at times. It can feel like a relentless, unrewarding slog. 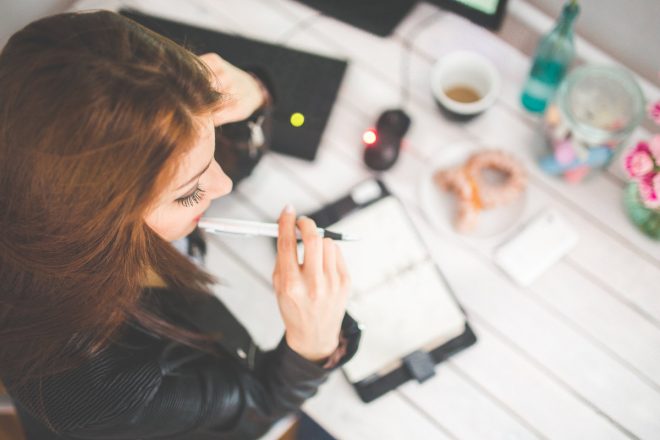 And those doubts (that were at the back of your mind all along) start getting louder:

“No one cares about what I write.”

“No one’s ever going to read this.”

… and maybe you do give up, for a day or a month or even years – but writing draws you back in.

Trust me, I know what it feels like. I’ve been writing for a living for eight years now, and writing novels for far longer, and I still find myself questioning. Doubting. Thinking about quitting.

Sometimes, of course, quitting is sensible. There’s no point carrying doggedly on with a project that you’ve long ago lost all interest in.

But often, quitting isn’t the right choice. A week later, or a month later, or five years later, you find yourself wishing you’d just stuck with writing a little longer.

(After all, since you’re reading this post, it’s a safe bet that deep down you don’t want to give up.)

Here’s how to decide when to stick with it and when to quit, whether you’re considering giving up on a single project, or writing altogether.

#1: Should You Give Up on a Writing Session?

Twenty minutes into your planned writing hour, you’ve accomplished precisely nothing. Maybe you wrote a sentence or two, hated them, and promptly deleted them. You’re feeling very, very tempted to give up and try again tomorrow.

Occasionally, this might be the right choice. If you’ve hit a block in your work-in-progress, for instance, perhaps you need to take a step back and do some extra planning.

Often, though, the reluctance is because you’re tired or in a bad mood or overwhelmed. So:

The problem is that one skipped session usually leads to another – and the longer you spend away from your work, the more resistance you’ll feel toward getting started again.

#2: Should You Give Up on Your Work in Progress?

If you’ve stalled on a project, it’s easy to start thinking about giving up. Maybe you got ten chapters into a novel, only to run out of steam, and plot. Or you started a blog, posted regularly for two months, but life got busy. Or you’ve been working on a non-fiction manuscript for years now.

If you’ve genuinely lost interest, then quit and start something new. I went through two blogs on topics that didn’t really inspire me for long, before starting Aliventures (where I’ve now been blogging for six years).

If you’re still at least a little bit in love with your project, though, don’t quit just because life’s gotten in the way. Instead:

#3: Should You Give up on Being a Writer?

I don’t mean to be discouraging: I wouldn’t want anyone to give up just because their life or their writing was going through a rough patch.

But if you don’t actually enjoy writing (or at least enjoy having written) and if you’re only writing because someone else told you that you should… then, of course, you can give up.

Most of us, though, feel called to write. Perhaps you’ve been writing, or you’ve wanted to write, for many years.

Why are you thinking about quitting altogether?

Perhaps you’re going through a difficult season of your life. Maybe, like me, you have very young children. Or, like several writers I know, you have a chronic, energy-depleting illness. Maybe you work crazy hours at your day job.

Perhaps you’ve had some really discouraging feedback. A nasty comment on one of your blog posts. A scathing review of your first published novel. An unusually harsh critique of your work from a writing buddy.

Perhaps your nearest and dearest don’t “get” your writing. I’m very lucky with my family – they’re a wonderful source of support – but I know many writers have spouses, parents or friends who see their writing as a waste of time.

None of these are easy to overcome. Some people might glibly tell you that “You’ll find time for it if it’s a priority” or “ignore trolls and haters” or “join a supportive writer’s group.” But of course, it’s not that easy.

Here are some ideas you can try, though.

If your life isn’t currently very compatible with writing:

If you’ve had some discouraging feedback:

If the people around you don’t “get” your writing:

I can’t talk you into sticking with it. I can’t sit with you while you write, and encourage you to keep going, much as I’d love to.

But I can tell you this.

That blog post you’re half-way through could be exactly what someone needs to read, right now.

That fan-fiction piece you’re working on could be the one bright spot in someone’s crappy day.

That novel you’re writing could become someone’s dog-eared favorite for years and years to come.

That book you’ve outlined could be exactly what someone needs to finally break through a barrier and reach one of their goals.

And this won’t just happen once. This will happen over and over again, for people whose lives you’d never otherwise have touched. You just have to keep writing.

Don’t let your fears or doubts rob the world of what you have to give.

Are you tempted to quit writing? If so, don’t struggle alone. Share why in the comments.