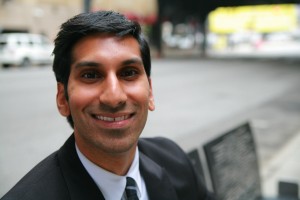 Al was a student of Seth Godin's Six-Month MBA program, and we've recently gotten to know each other through the blogosphere.

His book is called Read This Before Our Next Meeting, and I did just that this weekend. I read it, and it changed my Monday morning meeting. I hope it will change the way you do meetings, too.

Jeff: First of all, can you tell me a little about Read This Before Our Next Meeting — how you were inspired to write on the topic of meetings?

Al: I worked as an IT advisor for Ernst & Young and I used to visit with companies all across the country, and attend their meetings. Not a fun experience, at all. Meetings were long, boring, seemingly pointless, and most importantly there were just too many.

So I obsessively observed these companies and realized what the real problem was. The individuals inside of these organizations were terrified to make decisions, they called meetings instead.

And that's why I wrote a book, because I realized that if we want to fix this meeting debacle we can't just try to make meetings better. That hasn't worked.

We have to fundamentally reinvent what a meeting is supposed to be.

Jeff: As a writer, I'm particularly interested in the practical elements of the craft. How did you begin writing this book?

Al: I must have written and deleted my first line a thousand times. Although I've become accustomed to writing articles rather easily, the idea that I was starting a “published book”, and I needed to deliver a 15,000 word manuscript made it intimidating.

So much like a runner on a treadmill compulsively looking at clock ticking down to pass the time, I decided to focus on the word count. The only thing that mattered was quantity.

I wrote stream of consciousness rambling about my topic until I had 300 words of incoherence. It worked! At least I had something down on paper.  I continued the rambling for pages, until I had enough words that the resistance faded into the background a little.

Finally, I was ready to write. 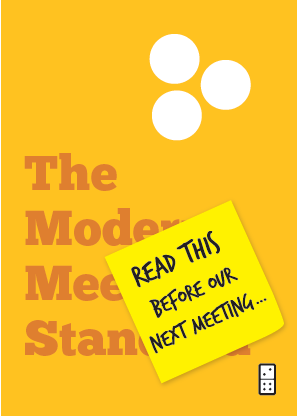 Jeff: And how did you finish?

Al: I planned to maximize the time I had to make the manuscript perfect. I had a couple days until my deadline, but in a split second decision, I shipped. It wasn't perfect, but if I spent the next couple of days trying to make it better, I feared I would never hit the send button at all. So I sent.

In retrospect, it was absolutely the right decision.

Jeff: The book is surprisingly short (as are most of the Domino Project books). Was it hard to contain all your ideas in roughly sixty pages?

Al: No, it was easy. The difficult part was accepting that my book was better shorter. My ego wanted the book to be as big as possible for some reason.

I guess often we equate quantity with quality. But it just isn't true.

I think that almost any book can be fit into a much smaller size. It's just a question of what you're trying to create.

In my case, I'm trying to create a movement and so I designed it as short as possible to make it more likely that people would read it, and share it.

Jeff: Did you struggle with finding your voice in this process of writing a manifesto? It reads pretty conversationally, almost as if it wasn't much work at all writing it. Was it?

Al: Good, that was my intention.

But finding my voice was extremely difficult. In fact it was Seth's most critical feedback for me. He said I had laryngitis at one point. But we find inspiration in strange ways.

One day during the writing of the book, I was watching Jerry Maguire. If you remember how the movie begins, Jerry becomes frustrated by the status quo at his organization and in a fit of inspiration wakes up at 2AM to write a mission statement.

That's all the inspiration I needed. From that point on I pretended I was Jerry Maguire, and the right words and tone came pouring out rather easily.

I guess sometimes you can find your own voice, by imagining someone else's.

Jeff: What are your hopes and dreams for this book?

Al: My hope is that people will read it and it will change them. Not in a small way, but in a big one.

The book is, of course, about meetings, but I’m really making a case that organizations need to fundamentally change how they do business.

Not so people can make it to happy hour a little earlier, but because organizations when they operate powerfully can do extraordinary things. They can put men into outer space, find the cures for diseases,and solve seemingly unsolvable problems.

My dream is that people get my message, they spread it, and entire organizations shift the way they approach making progress.

Jeff: Publishing has changed a lot recently and The Domino Project seems intent on being a unique player in the future of how ideas spread. Why did you decide to publish this book through them?

Al: I originally started writing the book with the intention of giving it away for free. The Domino Project’s main tenet is: don’t wait to get picked. I really believe in that philosophy wholeheartedly.

Of course, I was picked, and for that I’m forever grateful.

Because Domino is leading an important revolution. I think we'll look back on this project decades from now and awe at how they helped reshape publishing. Everything that Domino is doing is innovative and exciting: their pricing, their marketing, their design, everything.

Being a small part of something so revolutionary wasn't a choice that I had to agonize over. It was a gift that I treasure.

Jeff: For those who feel like they have a book in them, what advice do you have for them?

Al: Start a blog. It’s the easiest way to fight the resistance and get started writing in a way that exposes you to the world.

If you already do blog, then you have no excuse. Start today.

Anybody can write a book, but most people don’t. I know it’s scary, and you might need some help, mentorship, or support along the way.

The good news is this: the world loves to help those who have made the first step and decided. But it tends to ignore those that haven’t.

Starting today, you can buy Al's new book on Kindle or hardcover. (The hardcover is definitely worth having, in my opinion, and a great deal.)

Get the book here: Read This Before Our Next Meeting

You can also follow Al on Twitter @pittampalli and read more from him on his blog: The Modern Meeting Standard.

Disclosure: Some of the above links are affiliate links.

What about meetings do you absolutely hate? Share your grunts of dissent in the comments.