Note: I recently released a free eBook called The Surprises of Success. Other contributors include Seth Godin, Michael Hyatt, Ally Vesterfelt, Bob Goff, and others! Below is an excerpt from my introduction.

“I don’t have a dream.” It was the fear that haunted my thoughts that day. In fact, in a way, it still haunts me.

I sank down deep in my seat, surrounded by a hundred pairs of hopeful eyes.

We were all there, gathered in that multipurpose room (which was doubling as a conference center for the day), for the same reason: to pursue a dream. To find the thing our hearts had been searching for.

Some of us wanted to be novelists; others aspired to start our own ad agencies or travel to South America to make a documentary. Each dreamer represented a unique and beautiful dream, some special skill that the world needed.

The passion in that room was infectious, which only reinforced the feeling that I did not deserve to be there.

You already know what your dream is…     

“What’s your dream?” was the opening obligatory question, and we all did our best to respond in kind.

It was even something we had to inscribe on our name tags. I think mine said something profound and nondescript like “creative catalyst.” In other words, I didn’t know.

I had no idea what my dream was or what I was doing there, no idea how I ought to be spending my life. I just knew I didn't want to succeed at the wrong thing.

When people asked what I wanted to do with my life, I used big, fancy words and phrases that meant little to me but caused people’s eyes to glaze over just enough to prevent them from asking any follow-up questions, which was precisely my intent.

“I want to be a storytelling sherpa,” I told a guy carrying an iPad. He nodded, the fear of following up obvious in his eyes. Mission accomplished.

A few times during the conference, I talked about my day job, but that felt boring. I was sure my dream was something new and interesting, something “out there” that I’d never done before but would recognize as soon as it appeared.

Every time I answered another question, I felt like I was betraying myself, that people were slowly seeing through the facade and beginning to feel sorry for me. Me, the hapless wanderer who was at a dream conference and didn’t have a dream. The guy with no vision for the future, just a fancy name tag.

And then, just as I was getting ready to excuse myself from my table and sneak out the back exit, the opening speaker stepped up to the podium. With a few short words, he shattered my illusion: “Some of you here don’t know what your dream is,” he said. “In fact, most of you don’t.”

I looked around to see dozens of heads nodding slowly in unison. Apprehensively, I did the same, a little worried who was watching but eventually letting go and feeling the freedom that came with admitting I didn’t know what I was doing.

“But the truth is,” he continued…

You do know what your dream is. You’re just afraid to admit it.

My heart sank. As soon as he said those words, one word popped into my mind and immediately made its way onto my notebook: writer.

Your calling can surprise you

That surprised me. I didn't know that urge was in there, in me. So when I wrote that word, when I admitted I already knew what my dream was, it scared me.

Why? Because suddenly, I was without excuse. I was no longer afraid of failing. Instead, I was afraid of not trying.

Most people waste the best years of their life waiting for their purpose to come to them instead of going out and finding it. They succumb to the status quo and dream of life being different some day. They wait, unsure of the right path to follow. And as they wait, they miss an opportunity.

We often think of success as something that happens to us or as something we plan. But I've found the opposite to be true. When it came to discovering my true vocation, it was a process that surprised me.

The thing that I had been searching for had been there all along. It wasn't a grand epiphany, just a gradual awareness of what I was supposed to do with my life. I was just afraid to admit it.

We all want to “just know” what we’re supposed to do with our lives, for our purpose to be spelled out, but that’s not how life works. We have to do the work, but we also have to pay attention to the lessons life is teaching us.

I used to think your vocation was something you discovered, but now I know it's something that's been there all along. [Tweet that]

Recently, I collaborated with 14 other authors, bloggers, and thinkers on a project about the surprises of success. My experience in finding my life's work was not what I thought it would be, and it turns out I'm not alone. 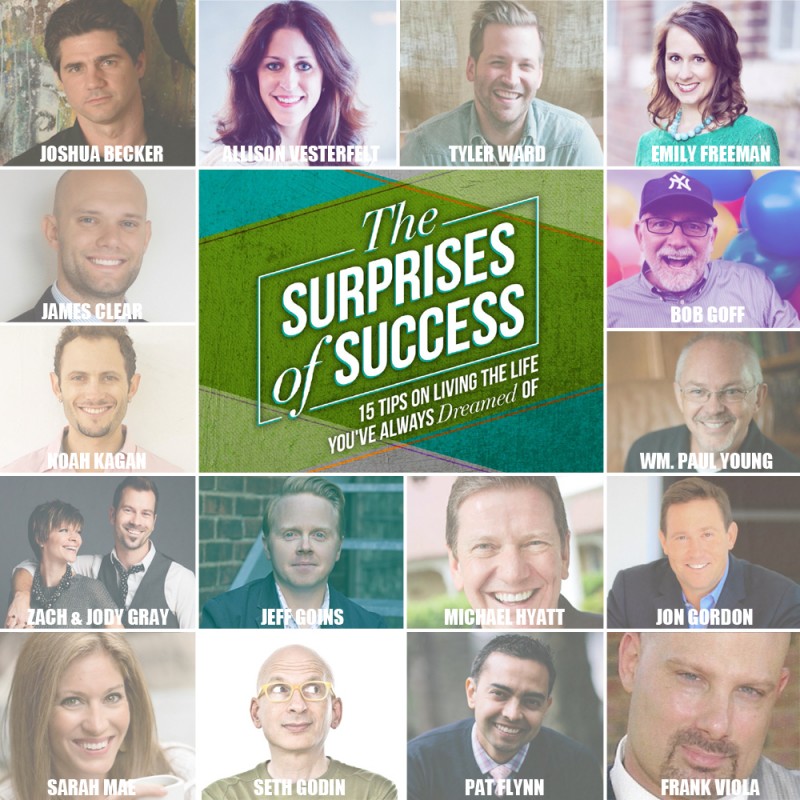 In this free eBook, you're going to find short personal stories and pieces of wisdom from some of the smartest people I know, all surrounding this question: “What's a surprising lesson you've learned about success?”

My hope is that as you read it, you take away some important points about what it mean to find meaningful work in this world. The process of finding my life's work surprised me. Maybe the same will be true for you, too.

What's something about success that has surprised you? Share in the comments.