The word “amateur” is often used pejoratively in creative industries, but the truth is you must become an amateur if you want to be a professional. 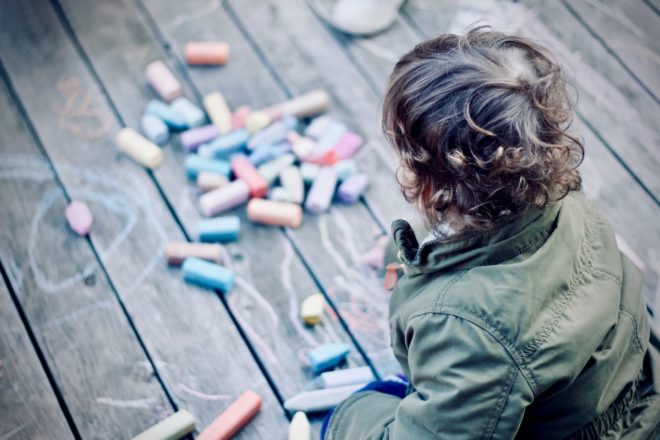 Do you remember when you started it, this thing you now call your craft?

Do you remember when you did it because you loved it, because you couldn’t stop doing it?

When it didn’t matter whether you were famous or successful, when those achievements were no more than mere distractions to the real work?

When what you did was not a means to an end but the whole point?

I don’t. But I’d like to remember. I’d love to go back to being an amateur, if I still can. And who better to teach me this than my six-year-old?

Recently, my son, who has never been too artistically inclined, has fallen in love with drawing. I’m not sure what spurred it on. It may have been the graphic novel I bought him at a bookstore on a whim about a dog who becomes a police officer, but suddenly he started copying the drawings in the book.

A few years ago, his preschool teacher told us, much to my chagrin, that he loved math but didn’t really enjoy art. Whose kid was this, this numerically inclined child who had no interest in a liberal arts education? Certainly, no son of mine!

Honestly, I never imposed my love for art and literature on Aiden. My wife and I both love music, so we’ve tried to make that a part of our family life, but beyond that, I have no desire to force my child to love something just because I do. If he wants to be a jock (which he does) and play with his graphing calculator (do they still have those? probably not), then that’s just fine with me.

So you can imagine my amazement when Aiden became obsessed with these books and started making comic books of his own. At first, he simply copied the drawings from the book. But then, just the other week, he created a completely made-up book of his own, using the characters from a book he read but with a new plot. Now, he’s working on completely original characters with a whole new storyline.

And you know what? He’s not interested in being a professional artist or comic book maker. He doesn’t even know what that means. He doesn’t want you to buy his book. All he cares about is doing his work and sharing it. “Can I take this to school?” he asked us the other night. “Of course you can,” we replied. Isn’t that the beauty of being an amateur? To simply do your work and share it?

Did you know that the word amateur means one who simply does it for the love of the craft? In fact, the word is derived from the Latin word amator which means “lover.” Somehow, this eventually came to mean one who doesn’t take their work very seriously or isn’t interested in being a professional.

But what do you want from an artist, a carpenter, even a checkout clerk? Someone who loves their work or doesn’t?

I want the amateur. I think we all do.

Aspire to be an amateur

To be honest, I’m tired of asking people at the checkout how their day is or running into folks at the post office and they sigh deeply and complain about their jobs. I can empathize to an extent, but as I’ve said before, learn to love the work or do something else. Certainly, we all have jobs to do and bills to pay. But life is too short to not be an amateur, a lover of your work.

[share-quote via=“JeffGoins”]Life is too short to not be an amateur.

“Are you ready to fall back in love with your work?” This was the question that began this blog nearly seven years ago, and it is the one that I keep returning to. It is all I have ever hoped to accomplish. And now more than ever, I think it is crucial to love our work, to be amateurs of it forever.

The way I see it, an amateur does three things. And if you want to do serious and important work, you must never forget these simple but important practices that all children know and most adults have forgotten.

1. An amateur studies the work of masters.

An amateur is, first and foremost, a student. As Isaac Newton said, “If I have seen any further, it is because I have stood on the shoulders of giants,” which in itself was a riff on an older quotation. There is no such thing as a self-made person; we are all beneficiaries of the generosity of previous generations, whether we realize it or not.

When receiving an award for a lifetime of excellence in puppetry, Jim Henson said his predecessor Burr Tillstrom did more to bring puppets to television than he ever did. None of us gets here alone, and if we do, what we have to share isn't very good. We all get to the same place by loving the work of our favorite musicians, artists, and authors, by being a true fan of the giants who came before us.

2. An amateur steals the work of masters.

An amateur is also an apprentice. You do not just study the work; you do the work. And at first, you have little to work with, so you borrow from other people, copying as much as you can, trying to get the technique into your bones.

As a young writer, Hunter Thompson copied every line of The Great Gatsby and A Farewell to Arms as part of his self-imposed apprenticeship. A friend criticized him for this, saying, “You're not Fitzgerald. What… are you typing The Great Gatsby for” His response: “I just like to get the feel of how it is to write those words.” He also did this with the Bible, believing some of the best poetry could be found in Scripture. saying he was trying to get that kind of writing into his bones. He wanted to know what it felt like to write in a way that transcended time. Twyla Tharp did the same when she entered the dance studios of New York City, mimicking the movements of the best dancers there. Later, she wrote about this experience in her book The Creative Habit, saying, “Before you can think outside the box, you have to start with a box.”

Even the master Michelangelo began his career not by creating original works of art but by peddling facsimiles of other people’s work. In fact, his first commission was a forgery in which a crafty art dealer commissioned him to sculpt a statue and mark it up so they could pass it off to a cardinal who collected artwork from Roman antiquity. The cardinal eventually discovered it was a forgery and was so impressed that he hired Michelangelo.

3. An amateur shares the work of masters.

All great creation is really curation. Every time you see the work of a master, what you are really seeing is an assimilation of a variety of styles and influences they have borrowed from many other masters. Most of Led Zeppelin's first record was comprised of a set of blues artists they had ripped off, and this would only continue throughout their very successful music career. Every Quentin Tarantino film is a riff on a film he admires. Everything truly is a remix.

Why did Zeppelin do this? To begin with, because it's impossible not to. The historian Will Durant once said that nothing is new except arrangement, which sounds familiar doesn't it? There really is nothing new under the sun. Secondly, because that's what great artists do; they “steal like an artist” as Austin Kleon would say, and to quote the actor Michael Caine, if you are going to steal, you had better steal from the best. That's what the founders of heavy metal music were doing: they were paying homage to the music they loved and adding their own unique spin on it. Not surprisingly, many generations of rockers, rappers, and songwriters would copy their techniques.

We are all amateurs. We are all artists. We are all lovers of the work that inspired us to get into this in the first place. The real trick, to paraphrase Picasso, is to remain one.

A call to love your craft

So, let’s be amateurs. Let’s become innocent students and appreciators of other people's work, admiring all the many influences that got us to this point, and do it for the love of the craft once more. Let’s copy the work of our favorite painters, poets, and singers. Let’s discover our own voices within the symphony of those echoing in our heads. Let's do this, because to do anything else would be doing a disservice to the many generations of amateurs who have preceded us.

So, are you ready to fall back in love with your work, regardless of the success or money or fame — or lack thereof? If not, then you have no hope of being a professional. I’ll say that again: If you can’t first be an amateur, you’ll never be a professional. It’s time to become true lovers of our work again. Time to rediscover our art, or maybe find it for the first time.

It's time to become an amateur again.

If you enjoyed reading this, be sure to check out my bestselling book Real Artists Don't Starve, which is where many of these stories come from.