This week, I’m hosting a special live training for creatives who want to make money from their art. Click here to claim your seat.

Since my new book Real Artists Don't Starve is coming out soon, I wanted to share with some of my favorite parts from the book.

Here's the next lesson:

The Starving Artist works alone.
The Thriving Artist Collaborates with others. 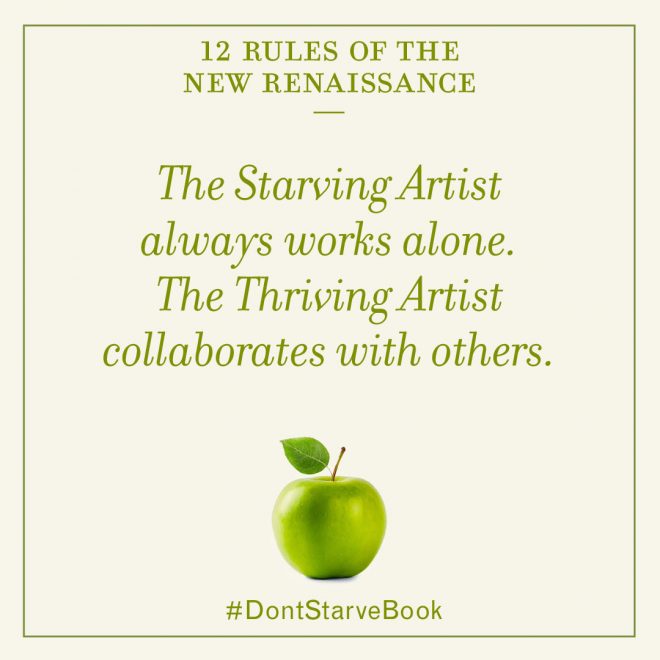 No one better illustrates this than the friendship of two of my favorite authors: C.S. Lewis and J.R.R. Tolkien.

“There was a group of them,” Diana Glyer told me, “nineteen men, and they got together once or twice a week for about seventeen years. And in those meetings, there was a special kind of
magic that happened.”

Glyer teaches English at Azusa Pacific University and has dedicated much of her career to the study of the Inklings, the literary group that included J.R.R. Tolkien, C.S. Lewis, and their friends. Professor Glyer told me how they met for decades once a week over tea and pipe smoke.

“They read their works in progress to one another,” she said, “and they stayed up late into the night giving each other critiques… And it is in this forge of friendship and engagement that some of the great works that we love were created.”

But for a long time, many people had no idea the Inklings were influencing each other’s work in such profound ways. Among the many examples Professor Glyer cited of how these men influenced each other’s work, one in particular stood out.

After the unexpected success of The Hobbit, J.R.R. Tolkien’s publisher asked him to write another novel. As he began writing what was then called The New Hobbit, he got stuck only a few chapters in.

One day he asked his friend C.S. Lewis to lunch and admitted to feeling bored with the project. “I don’t know what to do,” Tolkien said. “I think I’m done.”

“The problem,” Lewis replied, “is that hobbits are only interesting when they’re in un­hobbit-­like situations.”

That was all he needed to say.

“So,” Glyer explained, “because of one lunch with a buddy, the story where Tolkien was basically done and directionless, one comment opens up the vista and gives us what we now know as this wonderful, rich epic story, The Lord of the Rings. I think that’s pretty strong evidence of influence.”

With one little comment, C.S. Lewis changed the direction of what would become his friend’s greatest work. As Lewis himself once wrote, “The next best thing to being wise oneself is to live in a circle of those who are.”

The same, it seems, can be said for being creative. We don’t do our best work alone; we do it by collaborating with others.

[share-quote via=”JeffGoins”]We don’t do our best work alone; we do it by collaborating with others.

Real Artists Don't Starve comes out soon. If you pre-order the book before then, you'll get a 12-part online video course, expert interview transcripts, and access to a private community. All you have to do is:

Click here to download the full excerpt of Chapter 7: Collaborate with Others from Real Artists Don't Starve.