In the spring of 1934, an aspiring writer named Arnold Samuelson hitchhiked from Minnesota to Florida to see if he could land a meeting with his favorite author. Feeling discouraged over his writing, Samuelson believed he needed a mentor to help him improve his craft.

The writer he had picked to be his mentor? Ernest Hemingway. 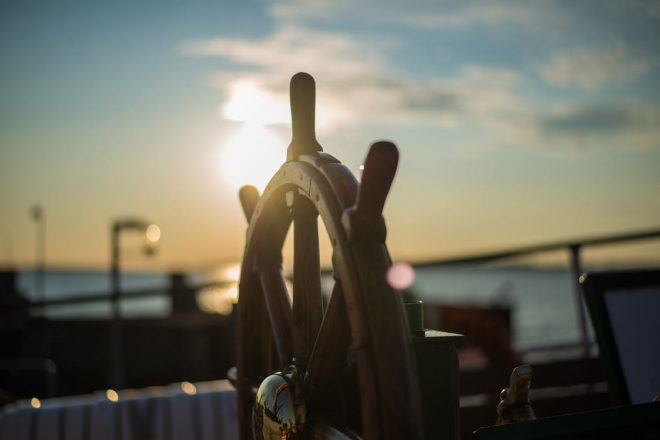 Samuelson showed up at Hemingway’s front door and begged the famous author for just a few minutes of conversation. Much to Samuelson’s delight, Hemingway agreed to talk with him and read some of his work. Although Hemingway wasn’t particularly impressed by Samuelson’s writing, he was impressed by the 22-year-old’s seriousness and dedication.

Unfortunately, Hemingway had planned to leave Florida soon on his boat Pilar. But luckily for Samuelson, Hemingway invited him to join the crew. While at sea, Samuelson had the rare opportunity to pick Hemingway’s brains about writing.

In a 1935 article for Esquire magazine, Hemingway shared some of the advice he had given Samuelson. Read on for five of Hemingway’s tips that we can use to improve our own writing:

Samuelson wanted to be sure he was devoting enough time to writing. He asked Hemingway, “How much should you write in a day?”

Instead of giving Samuelson an arbitrary word-count goal or a number of hours to shoot for, Hemingway answered,

The best way is always to stop when you are going good and when you know what will happen next. If you do that every day when you are writing a novel you will never be stuck. That is the most valuable thing I can tell you so try to remember it.

Essentially, Hemingway was warning us writers not to worry so much about reaching a word count goal that it depletes our creative energy.

Instead, end your writing sessions mid-paragraph while you still have a clear idea of what you want to write next. That way you’ll maintain your momentum and avoid showing up to a blank page the next day with no idea how to move forward.

[share-quote author=”Nicole Bianchi” via=”JeffGoins”]Don't worry about a word count goal because it depletes your creative energy. 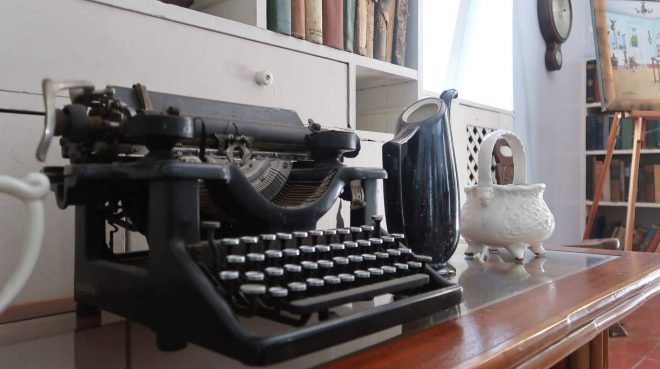 For those of you who are novelists or are considering writing a novel, Hemingway had one very important tip.

Samuelson apparently had doubts about whether he could finish a book-length project. This prompted Hemingway to discuss how writers can stop themselves from worrying about whether they can maintain the creative process day to day.

Here’s what he told Samuelson:

Once you are into the novel it is as cowardly to worry about whether you can go on to the next day as to worry about having to go into inevitable action. You have to go on. So there is no sense to worry… As soon as you start to think about it stop it. Think about something else. You have to learn that to write a novel. The hard part about a novel is to finish it.

Hemingway compared writing a novel to a war. When a battle is about to take place, a brave soldier casts all negative thoughts about the battle aside. As a soldier, it’s his duty to enter the battle and see it through.

Hemingway believed that writing a novel requires that kind of courage, especially once the process has begun. There will be days when it seems like you can’t go on. Maybe you’ve run into a problem with your plot or you don’t know how to write a certain scene or you feel like you’re running out of ideas.

Writing a novel is hard. But you’ve entered the battle, and now you need to win it.

Although Hemingway was talking specifically about writing a novel, his advice can apply to any kind of creative writing, whether it’s blogging, short story writing, or even poetry. Whenever you come to a place where you feel like quitting because you’re stuck, banish those thoughts.

Those negative thoughts are a distraction from getting your words down on paper. Fill your head with positive thoughts instead and keep moving forward. (And to avoid the danger of getting stuck, see tip #1.)

When I begin to worry about my writing, I like to remember a quote from Hemingway’s book The Old Man and the Sea. The protagonist Santiago muses, “Perhaps I should not have been a fisherman… But that was the thing that I was born for.”

Just as Santiago had to struggle to bring in his catch each day, writers have to write and see their projects through to the end because we were born to write. 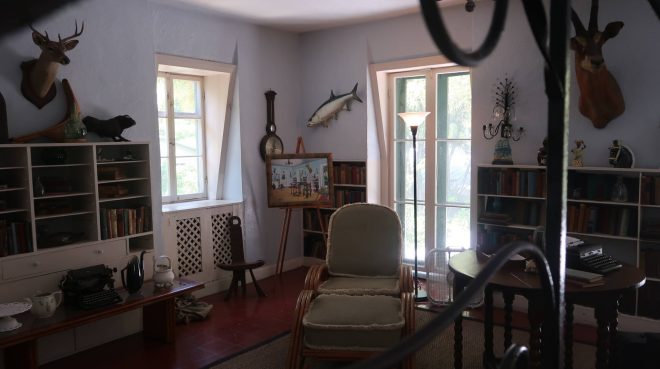 Hemingway gave Samuelson a long list of books to read (all classic novels) and told him,

[A writer] should have read everything so that he knows what he has to beat… The only people for a serious writer to compete with are the dead that he knows are good. It is like a miler running against the clock rather than simply trying to beat whoever is in the race with him. Unless he runs against time he will never know what he is capable of attaining.

By studying the work of the greatest writers, you’ll have a standard to judge your own work against. Is your plot too simple or does it have intriguing twists and turns like a Dickens novel? Is your dialogue too stiff or do your characters have unique voices like a Mark Twain novel? Can you tackle complex themes in your work, provoking your readers to consider their own deeply held beliefs, like a Dostoevsky novel?

Don’t just try to be better than average. Push yourself to keep improving your craft. If you’re not sure where to start with reading the classics, you could try reading through the books of Nobel Prize winners or pick books from a list like The 100 Greatest Novels compiled by The Guardian.

[share-quote author=”Nicole Bianchi” via=”JeffGoins”]Don’t just try to be better than average. Push yourself to keep improving your craft. 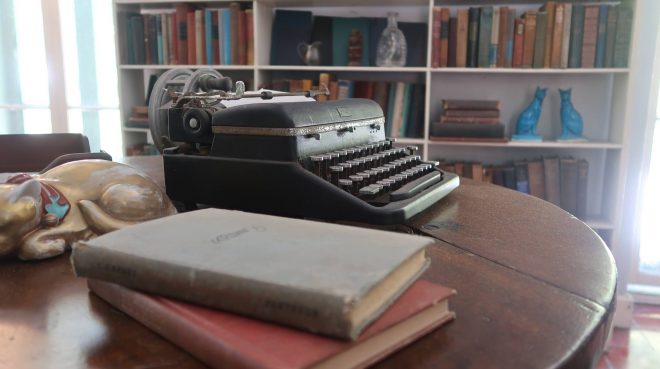 You’ve probably heard the old adage “show, don’t tell” countless times. But often it can be difficult to apply this advice to our writing. Hemingway gave Samuelson this exercise for honing his descriptive skills,

Watch what happens today. If we get into a fish see exact it is that everyone does. If you get a kick out of it while he is jumping remember back until you see exactly what the action was that gave you that emotion. Whether it was the rising of the line from the water and the way it tightened like a fiddle string until drops started from it, or the way he smashed and threw water when he jumped.

…Then write it down making it clear so the reader will see it too and have the same feeling you had. Thatʼs a five-finger exercise.

Hemingway’s exercise forces you to avoid vague generalities in your writing. Don’t just tell us catching a fish is exciting. Be specific. Show us why. Whether you are writing fiction or nonfiction, descriptive storytelling draws your readers into the story and allows them to connect with your writing on a more intimate level.

For example, Hemingway’s experiences as a deep-sea fisherman were the inspiration for The Old Man and The Sea. By using vivid descriptions, Hemingway transports us to Santiago’s boat. He makes us feel the salt spray, the sun on Santiago’s face, and Santiago’s strength and then exhaustion as he desperately tries to reel in a marlin. After reading the book, we know a lot more about what it means to be a fisherman.

Writing more descriptively can be learned. Hemingway told Samuelson that “There are a thousand ways to practice.” Go into a room and try to describe it. Observe people getting in and out of cars.

Hemingway told Samuelson to pay special attention to the small details and the way things made him feel. It’s these things that can make all the difference in your writing.

Empathy is the ability to understand and be sensitive to the feelings of others, to be able to see the world through another person’s eyes. Hemingway told Samuelson that it was vital for a writer to develop a sense of empathy,

Then get in somebody elseʼs head for a change. If I bawl you out try to figure out what Iʼm thinking about as well as how you feel about it. If Carlos curses Juan think what both their sides of it are. Donʼt just think who is right…As a man you know who is right and who is wrong… As a writer you should not judge. You should understand…Listen now. When people talk listen completely. Donʼt be thinking what youʼre going to say. Most people never listen.

Practicing empathy forces you to consider the motivations of others.

If you write fiction, it helps you to create well-developed characters instead of caricatures. To use The Old Man and the Sea as an example again, Hemingway describes Santiago so well that the character feels like an old friend by the time we finish the story. Hemingway lets us get into Santiago’s mind and see his dreams and passions, his courage, and his loneliness.

If you write nonfiction, you can use empathy to think more deeply about the subjects you are writing about. Why would others have a different opinion from yours? How can you respond to that opinion in your writing?

Samuelson didn’t end up pursuing a writing career (the memoir he wrote about the year he spent at sea wasn’t published until after his death). But we owe him a debt of gratitude for getting Hemingway to share these insights about writing.

Most of us will never have an opportunity like Samuelson’s to receive personal feedback on our writing from our favorite author. If you’re like me, many of your favorite authors might be long dead, in which case you’d have to find a way to time travel like Gil Pender in the movie Midnight in Paris.

But we can study the great writers who went before us. They have a lot to teach us. If we wish to become better writers and inspire more people with our words, there is always more we can learn, always more time to spend practicing.

As Hemingway once observed, “We are all apprentices in a craft where no one ever becomes a master.”

Who is an author you'd like to have as a personal mentor? What is the best writing wisdom someone has bestowed on you? Share in the comments.