You don't have to look very far to see that E.L. James's Fifty Shades of Grey trilogy is everywhere: in the check-out line, at the bookstore, maybe even on your mom's bedside table (just don't go searching for it at the library).

And of course, it's at the top of Amazon's Best Sellers List — consistently every day, without fail, for 150 days straight.

It's time for a change

As you know, my book just came out last week, and many of you bought it (thanks for that). It ranked as high as #18 on the Best Sellers list on Amazon and #14 on Barnes & Noble.

But we never beat Fifty Shades of Grey. And something about that just feels wrong. So I want a redo. A mulligan, if you will.

Someone texted me the other night, asking how to get on the Top 100 Books list on Amazon. It's not as hard as you might think.

There are actually several lists, including one for Kindle (both free and paid) as well as one for print books. Since Amazon updates its list hourly, all you really have to do is sell a decent amount of books in a short amount of time.

It varies every day, but you can get into the Top 1000 with a few hundred sales, maybe even the top 500 (I know this, because You Are a Writer sold around 500 books its first week and was ranked 500-something).

The Top 100 is a little trickier, but still not impossible, even for a first-time author. All it takes is a small, but dedicated tribe of readers buying your book at the same time, and you can climb the ranks quickly.

Since the list is updated hourly, I had a thought: What if someone decided to get a bunch of people to all buy a book at the same time? How many would it take to hit the Top 10, maybe even the #1 spot?

That's where you come in.

For this week only, I talked my publisher into making the eBook version of Wrecked available for only $0.99 (which is something like a 92% discount — crazy!).

A dollar is about as cheap as we can make it, so I'm hoping those who haven't gotten the book yet will jump on this deal. And for those who have gotten it, I hope you share this with friends. Maybe even consider picking up an extra or gifting it to someone.

Mostly, though, I hope we can conquer E.L. James and her tyrannical rule over all other worthy books. It's time for the queen to be dethroned.

Why you should join me

Let's be honest. Nobody's getting rich off a 99-cent eBook. Our goal is simple (and innocent): We want to get the book into as many hands as possible. And despite the hyperbole in this post, I have absolutely no malicious intent towards Ms. James.

I'm just curious to see if you can use an online tribe to quickly climb the lists — and what that attention could mean for the future reach of your book.

As always, I'll gladly share whatever I learn with my readers (I know many of you are writers yourselves). I did this when I experimented with giving away over 24,000 copies of my eBook (which you can read more about here), and a lot of people appreciated it.

So if you toss your buck into the pot, here's what you get:

If you're onboard with this experiment, and you've got a buck to spare, here's what I'm inviting (not forcing) you to do:

Don't have an eReader? No problem. Both Amazon and Barnes & Noble have free desktop apps to read eBooks on your phone, computer, or mobile device.

Ready to do this? Go grab your copy on Amazon (also available for Nook and other devices — see the full list here). Let's see what kind of damage we can do.

Well, we campaigned mightily… and lost.

Although we did pull ahead of one Fifty Shades book (see picture below), we didn't dethrone the queen from her #1 spot. I highly underestimated the power of erotica. 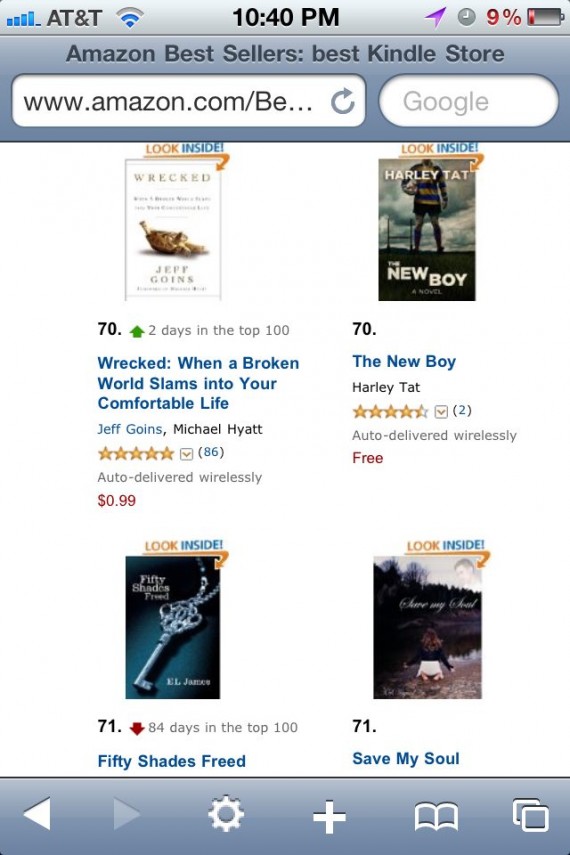 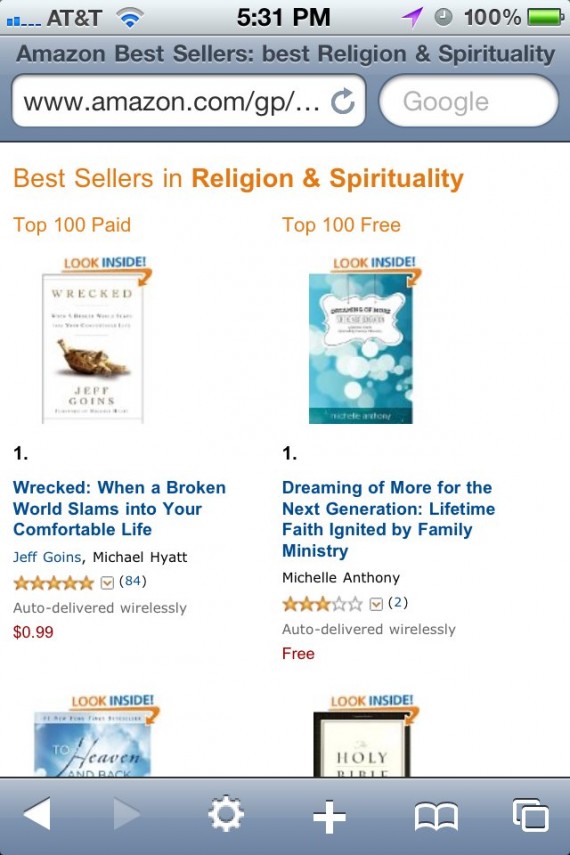 It was fun to rally the troops and see many of you jump into the fray. And Wrecked did make the #1 spot in several categories, which is cool.

I learned a few important lessons (for whatever they're worth):

All that to say, I had fun, and I hope you did, too. If you didn't get a chance to pick up the book, you can still get it here.