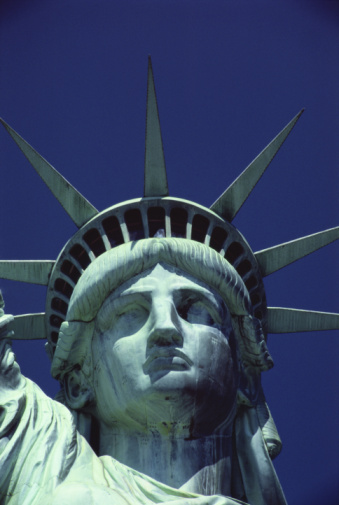 The people who built the Statue of Liberty gave the world a gift. Everyone who comes to New York benefits from it. As do those who see the memorable icon in a movie or on a key chain.

There are few symbols in the world as powerful as that green lady. When people look at her, they don't see oxidized copper and a museum.

They see freedom.
They see beginning.
They see new life.

It goes beyond the mere physical realm; it supersedes the moment.

I wonder if the ancient Jews felt a similar sense of significance when they saw the Second Temple of Jerusalem being rebuilt after the exile.

The rest of the city was still in shambles, but rebuilding the temple was their priority.

The temple was more than just a place of worship and sacrifice; it was an icon of solidarity.

A symbol can be a powerful thing.

A good symbol is powerful, precisely because it doesn't point to itself.

Great art always points to something else

My friend Jerry used to work with Steve Jobs. Scribbled on the whiteboard in his office is a quote that has always resonated with me:

If a powerful symbol, like the Christian cross or the American flag, becomes fashionable or trendy, it loses its meaning. It was never intended to be “art for art's sake.”

A symbol is a means to an end.

If it points to itself, it becomes arbitrary and loses its significance.

Take a step back

When you see a Monet, you don't look at the paint. You look between the brushstrokes and beyond the oil paint and canvas. His style is intentionally exaggerated and obscured to elicit in the viewer an emotional feeling.

This is how great art works.

The art isn't there just to look good. It's there to make an impression.

So it is with your “art” — the gift that you have to give the world.

It's not just a piece of work; it's a symbol of something more.

The artist has a responsibility

If you're not careful, the gift can focus on the wrong place — that is, the artist. This is tempting for those of us who create. When people recognize our work, it makes us feel fulfilled and significant.

But that was never the intention.

Great art is transcendent. It points to something beyond itself and the one who made it.

This is why the Greeks believed in essences and muses. They knew something that we've forgotten: Art describes the invisible world; it hints at the hidden story.

There should be great trepidation and freedom when the artist acknowledges this. There should be a burden that accompanies any creative act. The call to create is both an awesome opportunity and responsibility.

Wield it with caution and appreciation.

What kind of art are you creating? Does it point to something else, something other, something transcendent?