From Jeff (Goins): Today, Jeff Dolan is guest-posting on the blog. He is a writer, producer, and visual artist who is comfortable in a business suit or wetsuit, depending on the situation. Jeff is part Greek, enjoys surfing, and highly recommends seeing the movie Soul Surfer. For more about Jeff, you can visit his website and follow him on Twitter (@JeffDolan).

Before she was 20 years old, Bethany Hamilton decided to be a hero. But it was only after deciding that her flaw would not be a tragic one that this decision became conscious to her.

A surfer girl to the core who lives in Hawaii, she came face to face with a huge tiger shark that claimed her arm and almost her life.

By the grace of God, she lived through the tragedy only to find that she was never going back to normal. The sheer shock of not having an arm sent her into a tailspin of self-doubt and depression.

How could she achieve her dreams of surfing professionally now?

Every hero has a flaw

It defines who they are. It makes them more human. It resonates with us and gives us hope that our flaws do not prevent us from being a hero one day.

In ancient Greek mythology, Achilles, the great warrior of the Trojan war, was known to have only one weak point — his heel. Strike him there, and he would die.

To this day, we mention one's Achilles' heel as being the flaw that took down an otherwise successful, even heroic, person.

What is the one thing that will take you down if you let it?

What is your burden you carry through life that can be tragic or heroic depending on how you decide to deal with it?

You are the hero of the story called your life.

In the sense that you can make decisions to help or hurt others around you, inspire or infect others with your attitude, or simply be there for someone, you wield a power in your circle of influence that only you can control. 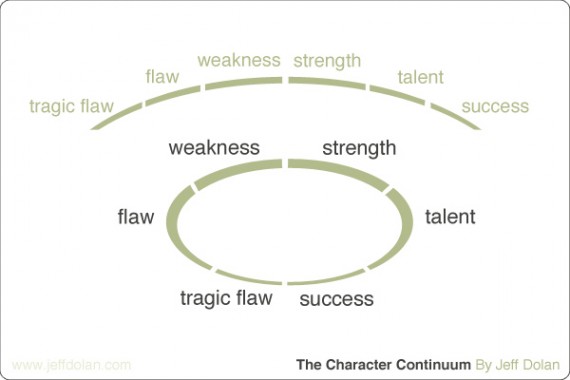 Being a visual learner, I was sketching out the continuum between success and one's tragic flaw. I found that I had to bend the line into a circle because of how close one can be to success or tragedy.

In any particular area of life, you can have a talent or strength that is not used properly, making it a weakness. You can have a weakness that becomes so glaring it becomes a flaw.

And you can have a flaw that takes you down tragically, if you let it.

The paradox of success

On the other side of the tragic flaw usually sits success.

Like Bethany Hamilton, who dreamed of becoming a surfing champion, one can experience how few degrees sit between success and tragedy.

To travel the other way on the continuum from tragic flaw to success, however, is another story.

The long road to victory

Bethany could have easily given up. She could have let her tragedy end with a tragic flaw that took down an otherwise successful professional surfer.

People would have heard her story, shook their heads, and wondered what could have been if she hadn't been hit by such a tragedy. “What a shame,” they would say.

Instead, through her faith, her family, and her fans, she decided that she would be a hero in spite of her flaws. She realized that just by showing up at contests and trying, she inspired others.

She gave hope to those who didn't have any.

She started to see the path back to the top of the surfing world as possible again. And she claimed her spot in the history of surfing as a champion, not a victim.

Your own heroic epic

While it is easy to tell Bethany's story and encourage others to follow her lead, it is much harder when the flaws in our lives turn tragic.

These are the times we are faced with the hardest decisions. We must keep going.

Hope is around the bend. It's closer than you think.

What is your tragic flaw, and how do you deal with it?