“Taco leg!” my son screamed while I carried him wrapped in a towel to his bed after his bubble bath. 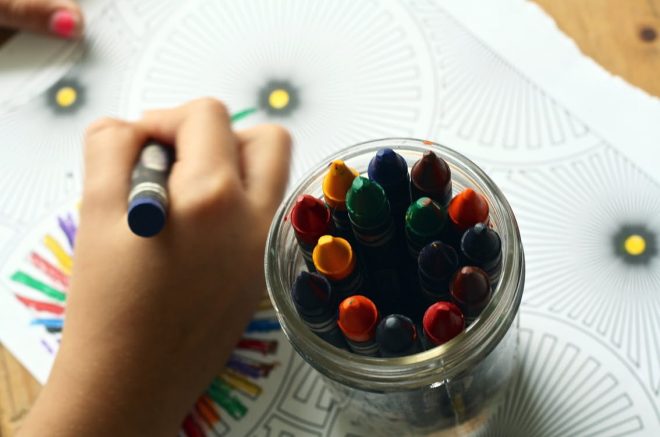 “Taco leg?” I asked Aiden, repeating the term just to make sure I heard him correctly.

“A taco leg,” he said matter of factly, “is a taco that has one leg on the bottom.”

Of course. Makes sense. Why didn’t I think of that?

As Aiden got ready for bed, something dawned on me. My son is the most creative he’s ever been. At nearly four years old, he makes up songs and stories all day long. He dances like no one’s watching.

And believe me, everyone is watching.

Just the other night, while we were eating dinner, he started singing this song:

An anchorman is born

As a child, I, too, made up things. Stories. Songs. Plays. You name it. I was constantly creating. Most kids do. Recently, I thought back to seventh grade home room.

Our teacher, Mrs. Frankl, would have us students rotate every day, taking turns to share the news with the rest of the class. The night before, you would watch the news, take notes on the major events and weather, and then share that report the next morning in class. I suppose it was an attempt to raise good news-watching citizens, but I didn’t see it that way.

When Mrs. Frankl asked me to read the news, I saw it as an opportunity to break a few rules.

So I borrowed my dad’s video camera, put on one of his ties, slicked my hair back, and gave the performance of a lifetime. The next day, my teacher and friends were taken aback when instead of reading a piece of paper, I pulled out a VHS and popped it into the VCR.

One time, I used a rather, shall we say, abstract drawing from my six-year-old sister and pretended it was a weather map. Another time, I played multiple characters. Each and every time, it was new, which was what I loved about it.

How not to change the world

I’ve retained some of my theatrical tendencies over the years, but many have fallen away—not simply due to lack of practice but out of fear of judgment.

I am afraid about this for Aiden. Soon, he might be too afraid to making things up on the spot. Soon, he might be ridiculed at school for spontaneously singing or moving his body to the beat. He might stop telling stories or making up words. And that’s when he will have to learn an important rule:

You don’t change the world by following the rules.

The process of becoming an artist begins with embracing the things that make us stand out.

You don’t change the world by following the rules.

Let’s be honest. Everyone is a misfit at something — particularly in youth. In our youth, we often embrace these traits but shun them as we get older. They may be our sensitivities or special abilities or certain areas of interest — anything that makes us different or unique.

We tend to avoid these things, because most attention leads to shame and embarrassment. So, we blend in, not just for a few insignificant years of pre-adolescence but sometimes for the rest of our lives.

This is the way of the old rules of creativity, which were designed to keep you in line, to make you fit in. But sometimes, these are the very things that will make you more creative. Consider, for a moment, this question:

What if whatever you thought held you back was the very means to success?

Being a misfit, at times, can be a gift. Or it least it can be. I don’t mean to mitigate the pain or struggle not fitting in can cause.

For much of my youth, I was picked on, beat up, and ostracized. I had few friends and often dreaded going to school. But there is an advantage to being an outcast. It affords you the opportunity to buck the status quo, avoid the road most traveled, and do what must be done.

That’s what I hope my son learns as he gets older, or at least doesn’t forget. But Aiden isn’t the only one we should be concerned about.

At some point, we’ve all been shamed into not sharing our gifts with the world. We’ve all been told what we have to contribute doesn’t matter and won’t pay the bills. We’ve all considered sticking with careers we don’t love because they’re outwardly successful.

But I don’t buy any of that anymore. I believe in something better, a future where my son can be himself and won’t be asked to conform and be something he is a not. A world free of the old rules and filled with taco legs.

Being an outcast gives you a chance to buck the system.

What does it take to become an artist?

Do those things and you will stand out. You will be weird. And you will be on your way to becoming an artist.

How did you embrace creativity as a kid? What do you need to see differently to become the artists you used to be? Share in the comments.

Previous: 140: Stop Starving and Start Making a Living from Your Art: Interview with Cory Huff
Next: Here’s How I Really Launched a Bestseller (and How You Can Do the Same)