Today, I have the privilege of interviewing one of my favorite writers in the world, and we talk about the creative process.

Steven Pressfield is an author, novelist, and screenwriter. His books include The Legend of Bagger Vance, The War of Art (a must-read for any writer), and most recently, Do the Work.

Steve's thoughts on Resistance have been instrumental in my working through and overcoming creative blocks.

The interview is rather lengthy, so we're going to jump right in.

Jeff Goins (JG): Steve, your new book Do the Work just came out through The Domino Project — how does this complement The War of Art?

Should the two be read together, or are they both standalone pieces?

Steven Pressfield (SP): Jeff, the books should probably be read in sequence — War of Art first, just because it's “the basics” of this particular view of the creative process; then Do The Work, which is much more specific. But both are standalone pieces, as well. At least, I hope so. 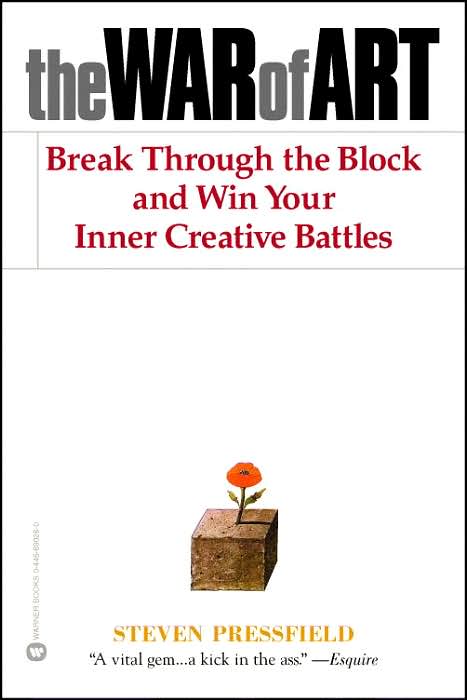 JG: If you don't mind backtracking a little, what led you to originally write The War of Art? Did you anticipate that it would become such a powerful manifesto for so many writers?

SP: When you're a working writer, as you know, sooner or later friends and acquaintances will get you alone and confide that they, too, have a book in them.

I always want to help, so I've wound up staying up many nights till two in the morning with friends, trying to psych them up to write their book or finish their dissertation.

In these discussions, the concept of Resistance came up, of course, and pretty soon I had the whole idea for the book.

Finally I just said to myself, I'm tired of staying up till two in the morning telling my friends this stuff, I'm just gonna write it all down and then when people ask me, I'll be able to say, “Here, read this.”

JG: Similarly, was there an inciting incident that led to writing Do the Work?

SP: The short answer is Seth Godin asked me. The long version is that I've been wanting to do a follow-up to The War of Art for a long time; then one day, I got a “Help!” e-mail from a young screenwriter who had to deliver a draft for school in two weeks and was totally stuck.

Normally I wouldn't get involved in something like that, but for some reason I decided to try to help. So I wrote back, giving the young writer a few drills and “assignments.” Sure enough, it worked!

He wrote back that he'd got the piece in on time and everybody loved it.  So, when Seth asked for a manifesto that was related to The War of Art, I thought, “Ah, here's a way to do it.”

JG: What are some of your current daily writing disciplines? Do you do anything quirky?

SP: I'm a believer in what my friend Randall Wallace calls “little successes.” I always go the gym first thing, or run, or do something act that faces Resistance and wins. That psychs me up for actually hitting the page.

I work every day without fail, even if it's only an hour or two. And I'm superstitious as hell. I have a huge bowl full of pennies that I've found on the sidewalk and picked up for luck.

JG: At what point can someone who writes call himself a writer?

SP: When he turns pro in his head. You are a writer when you tell yourself you are. No one else's opinion matters.  Screw them. You are when you say you are.

JG: There seems to be “warrior” language to a lot of your writing. Why is this?

SP: Because I see the internal struggle as a war. Which it is. There's a quote at the start of Do The Work:

On the field of the Self stand a knight and a dragon.
You are the knight. Resistance is the dragon.

Art is a war — between ourselves and the forces of self-sabotage that would stop us from doing our work. The artist is a warrior.

JG: What led you to get involved with the Domino Project? What has that been like? What kind of pizza did you order for them?

I'm a huge fan of Seth's and a friend, too. I would work with him on anything. When he started describing the Domino project, he got about eight words out before I said, “I'm in.”

And the people Seth works with are as smart and as much fun as he is — Ishita Gupta, Amy, Willie, Michael, it's an absolute pleasure to work with them. They are total pros, but they also have fun. And they are so far ahead of traditional publishers it's ridiculous. I want to work with them, just to see how they do it and to learn.

JG: What do you think will be the future of publishing, and how does that affect writers?

SP: I think traditional publishers will still be dominant, and they should be because they really do assure quality. But eBooks, which are huge already, are going to eclipse everything. They will save traditional publishing the way DVDs saved movie studios (for a while) and they'll greatly expand the number of readers.

Reading is alive and well and will get more alive and more well. Reading on tablets (or whatever the next tech device will be) is the future — and the future is now. Entities like the Domino Project will proliferate.

Amazon will become a serious force. Partly because it has the database of readers (Amazon.com's computers know who buys my books or your books or John Irving's books; I don't know and you don't know and John Irving doesn't know.) That's enormous.

The other thing is that writers themselves will take much greater charge of their own careers. They're doing it already.  There are still a few missing pieces to facilitating this transition on a grand scale (like an independent entity that will print, market and distribute books for writers without taking the giant cut that publishers do and without being so slow), but within five years, I suspect those companies will be in place.

JG: What advice do you have for aspiring authors?

SP: Be great. Malcolm Gladwell's maxim that it takes 10,000 hours of purposeful practice to master any art or craft is understated, in my opinion. Right now with blogs and the flood of internet access, a multitude of aspiring writers think they're ready for prime time. They're not.

Be great. Read. Write. Bust your ass. Learn and find your voice. As hard as you think it is, it's a hundred times harder.  Good luck.

JG: To paraphrase (and steal) a line from a popular show: When you die, what do you want to hear God say to you?

You can buy Steven Pressfield's latest book Do the Work on Amazon as well as the classic The War of Art (affiliate links). For more about this book, read this interview: “How do you really Do the Work?”

What does it mean for you that the artist is a warrior?

Disclosure: Some of the above links are affiliate links.