I stepped up to the microphone, palms sweating and heart racing. This was the moment I’d been waiting for, the culmination of months of practice and preparation. 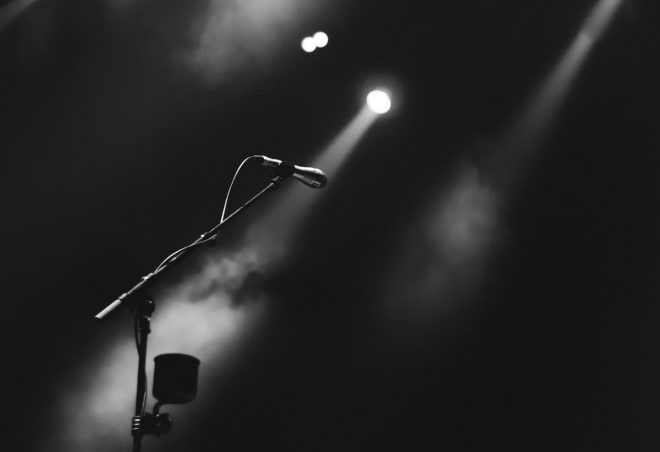 Looking out at the audience in front me, the bleachers full of anyone who had ever made fun of me, I took a deep breath and held it in. This was it. All the preparation, all those long nights of studying and preparing—it was all going to be worth it. And then I exhaled.

Stunned faces greeted me as my eyes opened to see my audience—peers, mortal enemies, and teachers—all with eyes on me. A few close friends grinned as they watched, and I closed my eyes again to focus, thinking back to the hours of study, of going to bed early, foregoing TV to squeeze an extra hour of prep time in the morning.

Staring at the back of my eyelids, I could see the words, hundreds of them, in my mind, having memorized what they looked and sounded like. I knew this word, had seen it many times. Now, it was just like remembering a photograph of a place I had visited before. I didn’t need to ask for a definition or a sentence; I knew this word.

I repeated the word to confirm I was done. Acquiescence. There was a pause, then the moderator, Mr. Simpson, spoke in his deep, resonant voice: “That is… correct.”

The school erupted into a roar of applause and cheers. My friends rushed off the bleachers, running, ready to greet me with high-five hands ready. I had done it. I had won the school spelling bee.

My opponent was an eighth grader who reportedly cried the whole bus ride home. Being a chubby, long-haired sixth-grader with an affinity for baggy concert T-shirts, I smiled a little upon hearing the news. It was a small piece of justice, payback for all those hours of study and all those years of being called a “nerd.”

It was victory, the first thing I had ever really won. The first accomplishment of which I could feel truly proud. But as they say, there is an intimate connection between pride and failure. And I was about to learn all about it.

There is an intimate connection between pride and failure.

What failure teaches us

The next year, I boldly stepped to the mic again, backed by an entire class of confident seventh graders winking at me, assuring me I had this one “in the bag.”

Convinced I was special and more gifted than my opponents, I didn’t bother studying half as hard this time. I just knew I’d win. I was wrong. Choking up on the last round, I lost to a sixth grader.

“That was an interesting spelling,” my science teacher, Mrs. Tuntland, said the next hour, right after watching me strike out in front of the entire school.

“Yeah, well… there was another word on the list like it. And I just mixed them up is all,” I said. Having misspelled the word flourishing, adding an e instead of a g to the end, I was a little defensive.

Making matters worse, I’d lost to none other than a sixth grader. Now that was justice. I may have shed a tear or two myself while walking home that day. I thought I had the whole thing in the bag. So why did I lose? Was I not confident enough? Was I not talented enough?

No, it was much more obvious than any of those reasons.

The truth is I hadn’t studied the list nearly as much as the previous year. The reason? Because I didn’t think I needed the practice. I was already a winner. Naturally gifted. What was the point in studying?

Because of my confidence in previous accomplishments, I failed to work as hard as before, and for that, I paid the consequences.

In life, we are given certain gifts and talents. No one would deny this, that some people are better at basketball, or accounting, or singing, than other people. But how one goes about acquiring such skills is the real mystery. Is it innate or the result of hard work? In fact, it might be both.

What I learned from the seventh grade spelling bee is that no amount of natural talent can compete with diligent practice. Being naturally talented is never good enough. Without the work that precedes the moment onstage, you, too, will fail. Not in a “I tried my best” kind of way, but in a regretful, “I could’ve done better” way, which is the worst way of all to fail.

No amount of natural talent can compete with diligent practice.

At the time of my failure, I wasn’t mature enough to admit my culpability. There were more important things to me that year, like fitting in and going to parties and finally getting a girlfriend (which didn’t actually happen but was a goal, nonetheless).

For years after, I coasted on “being smart,” letting years of practice and privilege give me the upper hand on my classmates — until it finally caught up with me. Upon entering high school, my GPA dropped, which concerned my parents but didn’t worry me. I signed up for a few extra-curricular activities and eventually joined my first club sport: the golf team.

All the while, I was searching for something, exactly what I didn’t know, but something nonetheless.

The mystery of motivation

Now, I can see what I wanted was something to excel at, something to drive me, something to give me purpose. Like winning the school spelling bee against someone two years your elder, we are all looking for a challenge worthy of our motivation. But this was a mystery to me for a very long time.

If the feat is too small, it will be boring. If too large, it will be demotivating. What we all seek is some project that is both attainable and at the same time a little unreachable, so we are required to grow.

We are all looking for a challenge worthy of our motivation.

In high school, I started acting in plays and enjoyed them. Words had been a part of my life for so long at this point that it wasn’t difficult for me to memorize a script and then regurgitate the lines on stage. This was lacking in our theater department and immediately set me apart, so I began to score many of the leading roles.

At sixteen years old, after several failed attempts at playing a musical instrument, I finally picked up the guitar and didn’t put it down. My dad taught me to play a few chords, and before I knew it, I was in a band with a couple of friends. Most weeks, we would rehearse nightly for hours on end. It was what I thought would be “the thing” but soon realized it was yet another shadow of my true calling.

Playing old Nirvana songs and strumming a few Zeppelin tunes was fun, but my real passion was creation. I wanted to make something, something other people would hear and enjoy, that would inspire them the way music had always inspired me. Which led me back to words.

In a way, it took mastering one skill to lead me to another.

I had always written but as I began approaching college, I started to take writing more seriously.

Weeks before graduating and going off to college without any idea of what I might major in, my English teacher who was notoriously hard on her students returned a paper to me that said, “This is excellent. Please consider a career in journalism or writing.”

I received an A on a report of a book I had never read.

To me, this was a sign of giftedness. It made me feel special to not try hard and still get a good grade. But the truth is my mom had been reading me the dictionary since I was a kid. I loved words, of course — that part is important. But I also had a lot more practice than many others. Which is also important.

The following year, I remember sitting in my parents’ car during summer break after my first year in college, puzzled as to what I should do with my life. Reaching into a box of old papers, I pulled out that old book report, hoping it might provide an answer. I suppose it did. But it wasn't just the giftedness I remembered — it was the practice.

Those two moments — the spelling bee and the English paper — are more connected than I realized. One was a triumphant result of practice, and the other was the epiphany I’d been waiting for, the key to help me unlock the mystery of what my life was about.

The two moments that define a writer's life are the moment when you realize you were born to write and the moment when you realize how hard it will be. In finding our life's work, we need both these moments — the times when we realize something comes easier to us than it does to other people and the acknowledgment that without hard work, all the motivation in the world doesn't add up to much.

Are you called to be a writer? If you want to hear the rest of the story and learn more about what it means to write for a living, check out the webinar I'm doing later this week. You can ask me anything. Sign up for free here.

What accomplishment are you coasting on? How has a season of hard work paid off at some time in your life? Share any experiences or questions in the comments below.