“Just be yourself” is probably the worst advice we could ever receive or give a person. Few of us actually know who we really are. And yet, if we can acquire this art of self-awareness, everything changes. 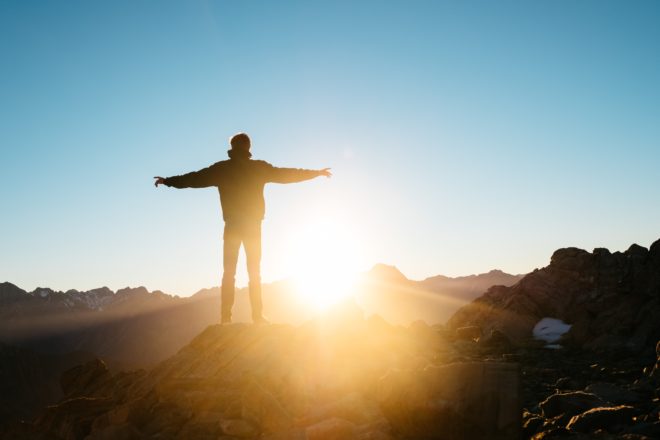 Ralph Waldo Emerson once wrote, “To be yourself in a world that is constantly trying to make you something else is the greatest accomplishment.” But how do I do that?

Which self ought I be? The “good boy” my parents wanted me to be? The smart student my teachers taught me to be? The person my friends and family and society expect me to be? Telling someone who's stressed or worried about the direction of their life that they should just “be themselves” is, at best, a cruel joke.

And yet, we do it every day.

I don't claim any authority on this topic other than I've learned the hard way that being yourself takes hard work. Self-awareness is a skill, not a privilege. It must be earned through the painful wake-up calls we get any time we chase what we think is important and are disillusioned by the process.

For me, that meant letting go of the person I thought I was to finally becoming myself. In doing so, I experienced more freedom and joy than I ever thought possible. Self-awareness has made be a better friend, a more patient dad, and, I think, a more empathetic writer and speaker.

But this is not easy. Becoming ourselves is a process that often takes years of hard work, hard questions, and a good look in the mirror. But the reward is worth the effort.

When we embrace this work of becoming ourselves, when we finally conquer that ageless quest for authenticity, we become truly free. We experience a lightness of being that cannot be matched by any external accomplishment or achievement. We can finally be comfortable in our own skin.

Self-actualization is about removing things, not adding them

Every year before school, my mom would take me to JCPenney to buy new school clothes. Usually, this was an outfit or two with maybe some socks and underwear. We didn't have much money, so this once-a-year trip to JCPenney was a momentous occasion.

After a series of embarrassments in junior high that left me virtually friendless, I entered high school with an eagerness to reinvent myself. As soon as I stepped into the department store, I knew what I wanted, begging my mom to let me spend my entire clothes budget of $20 on a single T-shirt. This was no ordinary shirt, however. It was a dark heather grey tee with a bright green Nike swoosh. It was a size large, of course, because in those days, despite my small frame, I wore baggy clothes to cover any belly rolls that a tighter outfit might reveal.

I'd never been into sports or brand names but always admired the jocks and popular kids who wore clothes with logos. I thought that perhaps this T-shirt could be the key to my becoming a new person. I'm not sure that I imagined it would make me popular, but at the very least, I wouldn't stick out like the target for ridicule I had been. If not popularity, then perhaps I could at very least achieve acceptance.

She just looked at me, sighed, and put it in the cart. My mom, despite her abhorrence for all things brand name, relented in love and let me buy the shirt. A week later, on the first day of high school, I proudly wore my new tee along with some old Arizona jeans and sneakers from Wal-Mart.

Walking in with newfound confidence, I found my way to my new locker and walked past one of the popular kids in my class. He stopped in front of me and just stared, then blurted out, “What are you wearing that for? You don't play sports!”

I thought maybe I'd start getting spontaneous high fives in the hallway, that the popular kids would invite me to sit at lunch with them, something. But not only did that not happen, I got a few laughs in the hall. My friend Matt said, “why are you wearing that?”

It was a fair question. I'd never worn Nikes, couldn't afford the shoes, and played precisely zero sports. Why was I wearing a Nike shirt? Because it was cool? Now, the T-shirt was bringing all kinds of attention I wasn't sure I wanted.

During PE, some kids started teasing me about it. “So you're into Nike now, huh? Been shooting a lot of hoops have you?”

That night, I threw the shirt in the trash and walked away. Then two minutes later, I returned to the trash can and retrieved the tee. Growing up middle class, I was taught to always clear your plate and never throw away $20 T-shirts, no matter how much they made fun of you for them.

The very thing I thought would make me cool had now become a new source of shame. That night, I thought I might never know what it took to be cool. Little did I know that the secret had nothing to do with wearing the right shirt.

I always thought being myself would be about discovering something new when instead it was about letting go of the layers of who I am not. When we shed the layers of lies, the stories we've been told about ourselves, all that's left is us. And that's pretty amazing. But I'm getting ahead of myself.

As I mentioned before, first we must become self-aware before we can even attempt to “just be” yourselves. So let's start there.

Letting go of who you're not to become who you are

To be yourself really means to accept the fact that you might not know who you are, that most of your behavior is a conditioned response to the environment in which you were raised and currently live.

So first we must let go of all the influences that have told us to be a certain way. We have to admit, at some point, that we have had less control over who we've become than we realized. Of course, most of us want to believe that we are mostly in control of our lives, that we control our destiny and that we have free choice.

But most psychology and sociology clearly proves this is not the case. Change where you were born, and you'd likely be a different person entirely, with a different religion or worldview, a different set of politics, even a different diet that would dramatically affect your physiology.

How were you conditioned?

You were told to be a certain thing.

At a very early age, we are told who we should be. This is called conditioning and is often necessary for your survival, or at least it was at some point. The idea that boys shouldn't cry and women should stay home to take care of the kids; the concept that children shouldn't cross the street without an adult and that sugar is bad for you—these are all ideas that at some point worked. Now, maturity is recognizing that a belief that once helped you survive or even thrive is one you no longer need.

You were rewarded for the wrong things.

In life, we often get rewarded for the wrong things, or for actions that simply don't resonate with us anymore. At some point, we may decide that we don't want to be that person anymore, and if that identity was one others approved of, we risk an ego death of sorts. Who am I if I'm not that? The good Christian? The faithful husband? The stalwart social justice advocate? Whatever it is, we often make our accomplishments and roles our identities, and this will cause a lot of stress and anxiety when we, as human beings do, inevitably change.

You believe the answer is outside of you.

Often later in life, we can get addicted to the things we do as a source of identity and use the next goal, the next thrill, the next relationship as another means of trying to find happiness.

Who you are, at least who you've conditioned to be, is like a computer that has been programmed with a certain operating system. And to truly be yourself, you first have to acknowledge the system that guides most of your decisions, values, and perspectives. You have to defrag and debug the system, and even eventually rewrite it.

Once we become aware of these blind spots, we can begin to let go of the layers of lies and experience the lightness of being ourselves.

The lightness that comes from being yourself

Here's what happens when you let go of who you are not in order to become who you really are:

You are freed you from the pressure to perform.

When your success is no longer your identity, you are liberated to do whatever you want—your “dance,” as it were—and follow your own bliss. You can work or rest, achieve or not, and still be you. You are not what you do.

You are free from criticism and judgment.

When you realize that nobody gets to tell you who you are, even if that means they are disapproving of your actions or even telling you that you're plain wrong or bad, then you can let people do just that without it affecting you. Criticism, I've learned, is just an opinion and often a poorly informed one at that. You can hear it without becoming it; you can simply let it be and move on to what must be done. Because, after all, there will never be something you do that everyone approves of. Might as well get used to it.

You are freed from the trappings of success.

When you understand that you are not what you do or what other people think, you have to go one layer deeper and understand that you are not even what you think you are. You are not the character you've been playing. You are something else, something deeper, something more. And when you realize that, life becomes an infinite game in which you are free to play, to pursue the work that you want to do without being trapped by any success you have or afraid of potential failure.

You can simply be and do without attaching any personal significance to any of it. In a way, you become a child again, and the world is your playground. You are free to love people without needing them and to bring meaning to anything you do without being anxious about what might happen next.

And when you learn that, everything changes. In the words of John Steinbeck, “Now that you don't have to be perfect, you can be good.” Which is to say, you can be yourself. And that's wonderful.