My new book, Wrecked, comes out next week. If you buy it between Aug. 1 and Aug. 4, I'll send you over $158.00 worth of free stuff. Find out more about that here. If you haven't read this yet, below is the introduction (adapted for the blog). Feel free to share it.

Little did I know I was going to get a crash course in sociology and the broken condition of humanity. 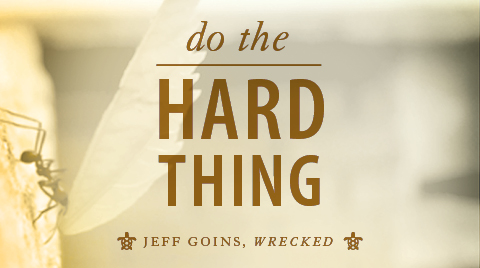 “I'm sure someone will help you.”

For every show at the Ryman, a local printer does a special run of posters that are available only the night of the concert. They usually sell out. We have an entire collection of them in our house, all from various concerts we’ve seen over the years, each represent ing a unique memory.

That particular night, we were excited about getting the print because it had the date on it — our date, the day we were married. There was just one problem: they gave away the last poster to the man standing in line in front of me.

No problem, I thought. I’ll just offer to buy it from him. He wasn’t interested. Nor were the twenty-five other people I asked. Each time, I would tell them the same sad story: it was our anniversary.

Then I would ask them, with a little manipulation, if they were sure they didn’t want to sell the print. Two dozen people later, I still had no poster. But something strange happened during each rejection. Here’s how each went down:

Me: “Okay, I understand. No problem. It’s just that—well, it’s our anniversary.” At this point, their eyes would get big. Their grip on the poster would loosen for a moment, and my heart would race. They would look at me with compassion and say softly, “Oh. I’m so sorry.” I would nod and wait, expectantly.

This was followed by an awkward pause in which I assumed they were trying to decide. I would look at them, and they would stare back at me. Then they’d pause, glance at their poster, and turn back to me without making eye contact to say, “Keep asking around. I’m sure someone will help you.”

That was the phrase that killed me.

Every person told me a version of this, each time with the same sincerity. I honestly believed they meant it. But the more this happened the more hopeless I grew. It seemed everyone was saying,

I’m sure someone will do the right thing. It’s just not me.

Isn’t this how life is?

We always assume someone else will come to the rescue, but it’s never us. Surely somebody will have the decency to be the hero. Right? It doesn’t work like that. Not when everyone assumes someone else will do the right thing.

I didn’t fault those people for not giving me the poster — that was their right. What was puzzling was how they struggled with their consciences before saying no. Only a few flat-out refused. Most just stood there for a moment, puzzled. They would say sorry, that they really wanted to help, and they encouraged me to not give up.

It was as if they wanted to give it to me but were afraid. That’s what frustrated me.

I wanted to say, “Yes, someone can help. You can!” But I didn’t. I kept asking around, kept getting rejected and feeling depressed the more I talked with people.

It wasn’t until the encore of the show that a young woman agreed to sell me her print. At that point, I was incredulous. We had spoken during the intermission, and she struggled like the others to give up the poster. However, she told me to see her before we left.

During the last song, I looked up a few rows, hoping to catch her eye as the band thanked the roaring audience. She finally looked down and smiled at me. I raised my eyebrows in an inaudible question, and she nodded. I couldn’t believe it; I had all but given up.

When I handed my wife the print, she was flabbergasted. In fact, she didn’t want to receive it. The gesture was too generous, too surprising. And that’s what made it beautiful.

I know we’re only talking about a poster here — nothing life changing. But at the time, it felt like a lot more than that. Maybe it was. Maybe it was a microcosm of humanity in all its grisliness and glory.

I’m no different from those two dozen people I met that night. I have my own little trinkets I’d rather not give up.

I have comforts and addictions I won’t let go of. I’m more selfish than I’d like to admit, bent on my own desires and needs more than those of others. Whenever possible, I defer responsibility. I avoid what is right and protect my own interests.

If we’re honest, many of us are like this. It’s human nature to look after your own survival first, even when it’s not a matter of life and death. We can’t help it.

We keep scrambling for scraps from the table, until one of us is finally courageous enough to do what that young woman did: to obey our conscience. To stand up and do what is right.

(Note: What made this the “right” thing to do wasn't that I deserved the poster — I didn't. What made it it right was that she obeyed her conscience.)

All over the world, ordinary people are making brave choices like helping beggars and moving to foreign countries. They're listening to that still, small voice whispering, “Life is not about you.”

This is the most important life change that will ever happen to you, if you let it. I’ve experienced it myself — at least in part — and it has been anything but comfortable.

It’s been ugly and hard. I’ve had to give up my rights and expectations so I could find the life I was longing for. And it looked nothing like what I expected.

The strange part? I wouldn’t trade it for the world. I couldn’t. I’ve been changed from the inside out. I’m no longer the same me. All because of a choice that defined me and continues to shape how I view the world.

Today, I challenge you to do two things:

Lastly, I want to implore you to not be one of those people saying, “I’m sure somebody will help you.” I hope you take time today to respond to that voice inside of you, prompting you to give more and get less.

I hope you realize the “somebody” we’re all deferring to (to do the right thing) is you. (You might want to tweet that.)

To download the first chapter and get on the list to be notified when the book comes out (so you don't miss the free stuff), click here.