I just wrote and launched an ebook in 30 days. It wasn’t easy, it wasn’t pretty, and yes I did ugly cry. Despite this, I faced my fears and tackled my paralyzing perfectionism to break through and do the unthinkable… make money from my art. 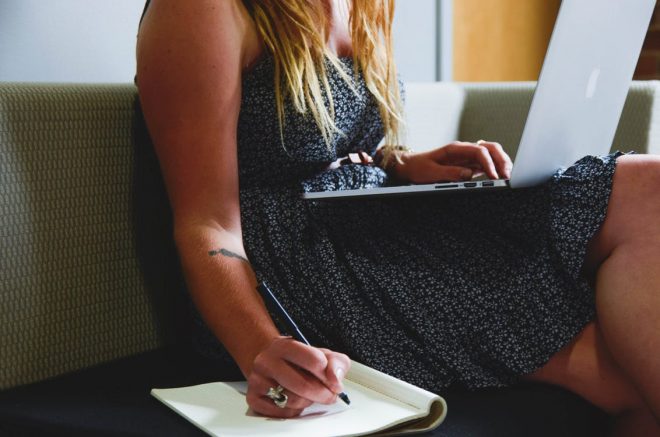 This is the story of how I created a simple product my dream clients actually wanted, wrote over 30,000 words in about a month, and then launched my book, Simple Is The Cure, to my email list of under 500 subscribers to make $800 in a matter of a few weeks.

Last year I was able to attend the second annual Tribe Conference. While there I was privileged to join the VIP mastermind group where Jeff personally spoke into my struggles as a writer.

During the mastermind roundtable, he hopped over to my group, listened to me state my case and matter of factly delivered an assignment to me:

“Write a 30-day devotional combining all of your knowledge as a health coach, artist, and minimalist. Then launch it. We can make you $1000 from the launch easily.”

After our conversation at Tribe, Jeff decided that in order to make the most impact I would need to refocus my efforts. This assignment was never about just making money. If it were, then I’d probably fail and he made that clear from the word go.

“Get 30 women, survey them about their biggest health concerns, and coach them every day for 30 days, getting feedback along the way. When this is over, you’ll have a set of 30 things that people really want, and case studies to prove that what you teach actually works”.

Here’s a step-by-step look at how I took Jeff’s assignment and instructions and implemented them to get the above results.

Right from the start, Jeff asked me to let my email list know that I was writing a book. The basic instructions from were:

We agreed that the scope would be 30 women getting free coaching for 30 days for the entire month of November. December would be all about writing the draft and pre-selling. And in January, I would build interest and launch the final product. Admittedly, we originally wanted to launch by January 7th, but ended up moving the launch date to January 31st.

Gather a group of willing participants

I’m blessed to have such an amazing network of friends and acquaintances that were willing to join me for an experimental 30 days of simplifying life, health, and wellness.

In October, I wrote a quick introduction email to a list of 30 women I handpicked letting them know what I was doing and how they could get free coaching for 30 days. From the start I let them know that I was doing this project to collect material for a book that would later be for sale.

I started a private Facebook group and started adding people who were on board.

Give them what they want and teach what you know

I then surveyed each of them asking what their biggest struggles were around health, wellness, spirituality, home environment, fashion, etc. I asked them what they wanted to learn about and what would be of most help to them.

The feedback I received directly informed what I taught.

Once the Facebook group was up and running, I gave them a start date (November 1st), some basic rules, and a quick outline of what to expect. I did most of this through videos or Live broadcasts within the group itself.

November 1st came and I was so unbelievably nervous.

Could I do this for 30 days straight? I’m a procrastinator. What if they don’t get any value out of this? What if I fail?

I had a lot of physical resistance, but knew to expect this because Jeff warned me that I’d be “kicking and screaming the whole way”. That’s an actual quote.

Day 1 was a video about setting intentions. I gave a quick setup and the assignment and it was done. People watched, people commented. It worked! Hooray. Only 29 more to go.

As I posted more videos, I got more feedback which I implemented. None of the videos were professionally done, scripted out, or beautifully shot. I used my iPhone and my 10 year old MacBook. The key was showing up and giving them what they wanted to the best of my ability.

It wasn’t perfect, which gnawed at every single perfectionist bone in my body. Rather than waiting till I knew what I was going to say or do, I had to act on the feedback of the group.

At Tribe Conference last year, Tim Grahl said that to make progress quickly it’s best to shorten the feedback loop. Don’t wait until you're three quarters of the way into a project before asking for advice. Get it early and course correct.

This is what I did and it actually became a huge comfort to me. The group was my guide so that I could be theirs.

Get testimonials and determine pricing

November was a fun month. I did 31 or 32 videos in 30 days, had over 20, 1 hour coaching calls, and helped women get clear on what they actually need to be healthy, less stressed, and more balanced.

When the 30 days wrapped, it was time to get more feedback. I wanted to know:

In fact, I was giving my tribe what they said they wanted a price that they wanted and felt was more than fair.

You might think that pre-selling a book or product before it’s even complete is either insane or dishonest. But I was just following orders.

Jeff asked me to set up a link on Paypal, and send a quick email to only five people from the group letting them know the book was available for pre-order.

Of the five, two people pre-ordered and one was my mom. Thanks mom!

Even though it was only two people, I had what I needed to move forward. My product sold. That’s all that mattered.

Go into a cave and write

During the 30 days of coaching, I was keeping a very, very rough draft going in Google Docs. I did this for three reasons.

Ultimately, I ended up using Google Docs for the entire project. I chose three fonts to work with and played with the formatting so that I could make it look super slick.

One of the things that got me through, was Jeff sharing a quote from Tribe Speaker Alumni, Whitney English. Go ugly early.

My goal was to finish; to ship it. December is a crazy time of year for everyone. It’s even more insane when you’re trying to write a book.

Writing was slow and arduous at this time. I plugged in what I could but needed the month of December to hammer out the details and outline of the book.

I also used this time to get more feedback. I shared the earliest rough draft (aka the ugly draft) with my group before it was even halfway complete. I asked them if I was on the right track and what I needed to change.

Jeff asked me to build a sales where people could learn about the book and order it.

The sales page copy was based on an article from guest blogger, Ray Edwards. You can take a look at that article over here.

Use a minimum viable product to build hype

All of January was about building interest within my community.

At this point, I was still writing feverishly and feeling like it would never come together. Even though I felt far away from my launch deadline of January 31st, Jeff told me it was time to start raising awareness.

I did a free 7-day video series all about how to live a cleaner, better life from the inside out. Every day for 7 days, I invited people to join my email list to participate in this free video training series (again, shot on my iPhone).

In these video’s I told people to pre-order the book at $19.00 because they would receive 3 super cool freebies. Also because after the 31st of January, the price would go up.

I had a total of seven sales during that pre-launch phase, four the week after, and 14 the week after that. Last week I sold 13 copies (one cash sale). This plus the two I pre-sold in December comes to 40 sales at $19.00.

All in all, I’m insanely proud of this project. I still have a lot of work ahead of me, but now I have the framework I need to keep moving forward and spreading the message of simple solutions to optimize health and wellness.

The most important thing is that I broke the seal. I have a product. I have knowledge and confidence that I can use to keep moving forward.

If you want to learn more about how to optimize your health and life with simple changes, you’re invited to subscribe to my blog where you’ll get access to a free 7-day video course all about how to live a cleaner, better life from the inside out.

Tickets for Tribe Conference 2017 are available now! Click here to reserve your spot and connect with other writers like Brianna.

What kind of product are you struggling to create? How could you apply lessons from Brianna's story to start moving the needle? Share in the comments.