Editor’s note: This is a guest post from Pamela Hodges. She writes about art and creativity on her blog and is a regular contributor for The Write Practice. You can follow Pamela on Twitter.

My cat, Pooh Hodges, always wanted to be a writer. His mother told him to study mouse hunting. She didn’t think there was a future as a writer. 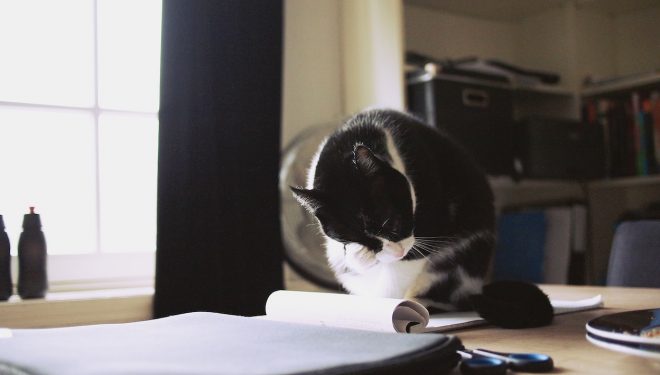 “How will you make a living?” she asked him. “You should be chasing mice. You are not a writer. You are a mouser.”

Pooh believed what his mother said. He didn’t believe he could be a writer.

After a near-death experience, when Pooh was lost in the woods of Pennsylvania for three months, he closed his mouse-hunting business and began to pursue his dream of being a writer.

There are several reasons why even cats need to become better writers.

Even though Pooh took a creative writing class at the university, where he received a degree in mouse hunting, he realized his writing needed to improve.

People might start reading the stories my cat wrote because they think cats are cute. But if my cat doesn’t write his ideas clearly, a reader might stop reading because they don’t understand what the cat is trying to say.

Cats meow, but they are not always understood. The Tribe Writers course helped Pooh develop his writing voice with practical exercises. In lesson 1.6, Hone Your Voice (The Beauty of Brevity),  Pooh learned to avoid filler words and to write more efficiently.

Pooh wanted to help humans understand how a cat thinks, but he did not have the skills to start a blog or build a platform. After hearing me talk about Jeff Goins and Tribe Writers, he decided to study the Tribe Writers course material with me.

This is an excerpt, taken from Pooh’s About page on his blog, The Cat Who Writes:

“I am the cat who writes. I write about the world from a cat’s perspective. Because I am a cat, after all. Would you expect me to write from the perspective of a dog? Silly. Dogs are not as smart as cats.

My name is Pooh. Pooh Hodges, My full name is Winnie The Pooh Hodges. My friends call me Pooh. I spell my name with an H on the end.

I am a writer.

I have had a hard life. Born to a single mother in a back alley in Wisconsin, I never knew my father. My sister died young. I am writing my story. I dictate, and one of my staff types.

I am taking Goins’ advice and writing in public.”

As a cat, Pooh could have tried to rely on his good looks alone. But eventually, readers would have gotten tired of poorly written, vague ideas, and they would have stopped reading his writing, no matter how beautiful his fur was.

Instead, Pooh came running every time he heard Jeff’s voice on the training videos. After each lesson, Pooh applied the principles he learned. He started his own blog, The Cat Who Writes, and he began to write every day, getting better with daily practice and focused learning.

4. To expand their reach

In the third section of Tribe Writers, Expand Your Reach, Pooh learned about the value of guest posting. He listened to Jeff’s advice and became a regular columnist on The Write Practice. Pooh interviewed Jeff Goins for his book The Art of Work; Steven Pressfield for his book Do The Work; and Marion Roach Smith for her book, The Memoir Project.

Pooh entered a how-to contest on Problogger in 2013, and won. The skills he learned in the Tribe Writer course helped Pooh show the Problogger readers how to be cats.

The blog post Pooh wrote is now a book on Amazon: How To Be a Cat.

Do you want to be a cat like Pooh Hodges? What are you doing to improve your writing? Share in the comments.

Previous: 127: Deconstructing the Elements of a Successful Conference
Next: Why I Started Writing Fiction: The Power of Beginning Again