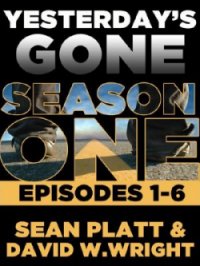 Ever wonder what all the eBook hype is about? Is it really a revolution of content and publishing? Or just another fad?

I recently connected with a couple of guys who are doing something really interesting with ePublishing.

So I asked them for an interview.

Sean Platt and David Wright are authors of an eBook project called Yesterday's Gone, a series of fictional stories delivered digitally over a period of time — like TV shows and comic books.

But I don't want to give a lot away. I'll let them say the rest:

David Wright (DW): Yesterday’s Gone is a series about what happens on October 15, when most of the world’s population vanishes in an instant.

The series follows those left behind as they try to make sense of what happened, find their loved ones, and come together or drift apart as a growing evil stalks them.

The story has elements of post-apocalyptic horror, science-fiction, and adventure.

JG: How is it unique?

DW: A few ways. First, the format is serialized, something that’s not new, but you don’t see a whole lot of in eBooks at the moment.

The story is told in 100-page eBooks which we (my co-author Sean Platt and I) call “episodes.”

We structured the story like serialized TV in a way, building tension throughout to a great cliffhanger of an ending at the end of each episode that leaves you wondering, “What happens next?!” 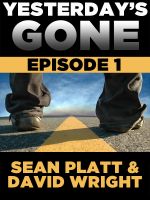 The book is told in six episode seasons. At the end of each season, we combine the episodes into a full season book, which people who don’t want to download the whole thing in one shot can do, making the series more like a regular fiction series, if you just buy the season books.

The other unique thing about Yesterday’s Gone is that even though it’s a thriller and fast-paced, we’re not afraid of the quiet moments.

The characters are deep and layered with lots of shades of gray. There are moments in the series where you will cry, some where you will laugh, and then other moments you’ll scream.

JG: What does the eBook revolution mean for the creative writer? What about readers?

DW: The biggest advantage that I see is that you can produce more work in less time.

There’s a magical bond that exists between authors and readers. When you find someone who can captivate you and bring you to another world, you want to make a return trip with the captain that brought you there.

When I find an author I like, I tend to buy all their work. If they can release it quicker, we all win.

DW: I’ve loved serialized fiction since I was a kid in the 70’s and watched a TV show called Cliffhangers. The show featured three ongoing serials and always left you hanging on to the following week. At the same time, and into the 80’s, I was a huge comic book fan, and loved how they always left you hanging.

In the 90’s, Stephen King released The Green Mile in six serialized books (the model we adopted). And that’s when I decided I would someday do the same thing.

Sean and I are big fans of serialized TV like The Wire, The Walking Dead, Breaking Bad, LOST, Carnivale, and a ton of others.

We’ve wanted to create a serial since we met. We tried with an existing idea I had, a vampire book called Available Darkness, but it wasn’t a true serialization. It was a book we were breaking apart. 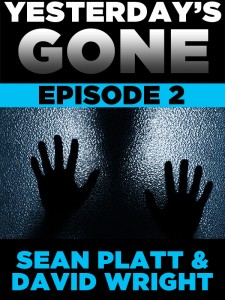 We wanted to do it right — time the stories to a serialized format, build the action to great cliffhanger endings, and really get readers excited. So we came up with the idea for Yesterday’s Gone.

While serialization has been around for hundreds of years, surprisingly few big-name authors are doing it today. I’ve heard from a few naysayers: people who think the idea of serialized eBooks is bad — “they won’t sell,” “nobody wants to wait for a book to continue,” and a bunch of other reasons the format will fail.

I think eBooks are the perfect low-cost vehicle for serialization, and it’s only a matter of time before someone does it big and the idea catches fire.

As a reader, the thing I love most about serialized books and series in general, is that when you find a book you really enjoy, a world you want to see more of, characters you’ve come to know and love, or hate, you don’t want to leave.

You want the story to keep going.

We’re not willing to wait for someone else to make it popular. We believe readers are ready now. We’re so excited about serialized fiction that we’re developing two other serials for launch next year.

JG: We've heard so much hype about the “eBook revolution” and unknown authors selling a million books in six months. Is writing books no longer a “poor man's passion”?

DW: I don’t see the recent success of eBooks as some kind of gold rush. I liken it to a crack in the door backstage.

It used to be that there was a hulking security guard standing outside who’d only let certain people through.

Now the door has been left open, the guard is taking a break. You have an opportunity to sneak onto the stage and draw a crowd, but you still need to be able to perform once you get there.

The basics of writing and marketing still apply, and there’s lots you’ll need to learn. But if the timing’s right, your work is good, and you are consistent, you can succeed.

I don’t think writing books is relegated to how much money you make. You’re either a writer or you’re not. With luck, you find an audience who gets your stuff and you can make enough to keep writing for them, and yourself.

JG: How has blogging shaped the future of books — if at all?

DW: In the fiction world, I think blogging hasn’t shaped book content so much as it has given readers access to authors in a way that was never before possible.

Can you imagine 20 years ago, being able to instantly access your favorite author? Ask a question, comment on something, or have a meaningful discussion?

If I could have commented on Twitter to Clive Barker the day he opened my eyes to the magic that is his writing, I certainly would have reached out in a moment. As a reader and a writer, that connection is incredible.

Some writers prefer to be left alone, and that’s cool. Social media is not for everyone, especially if you’re antisocial.

Blogging is another tool to relate with your readers or market. But use it wrong, and you can destroy what you took so long to build.

JG: Why should someone read your book?

DW: Escape. To get lost in a world, if only for a little while, via great storylines, complex characters, and of course, the killer plot twists and cliffhanger endings!

Plus, reading Yesterday’s Gone is known to cure the common cold, and make you far more attractive.

JG: For those who want to write their own serialized novel, how do you get started?

DW: Write. Write a lot. The more you write (and the more you read), the better writer you will be.

Once you’ve got a few books done, upload them to Amazon, or one of the other eBook services. You’ll want to learn some marketing basics and follow some of the indie author blogs. But don’t let that slow down your writing.

It’s easy to get distracted, which is why I hang this message to myself on my wall, “Always keep writing.”

[specialbox] Note: You can get the Yesterday’s Gone pilot for FREE (usually $.99), or get the full season for just $4.99. If you want to make sure you don’t miss a thing, click here to become a “Goner,” and get exclusive chapters with shocking endings, and a ringside seat to the behind-the-scenes info.[/specialbox]

What do you think is the future of the eBooks? Share in the comments.