Note: This is a guest post by Rachel Miller, who is the Executive Director of Forbid Them Not Ministries and the author of three books. She is the happy aunt of 10 amazing nieces and nephews, and slightly addicted to life in Montana.

A year ago last week, I climbed a set of wooden steps and reached for a door that would change my life. With each step and each tightening knot in my stomach, the opening phrase of The Art of Work echoed in my brain:

A calling is not some carefully crafted plan. It’s what’s left when the plan goes horribly wrong. 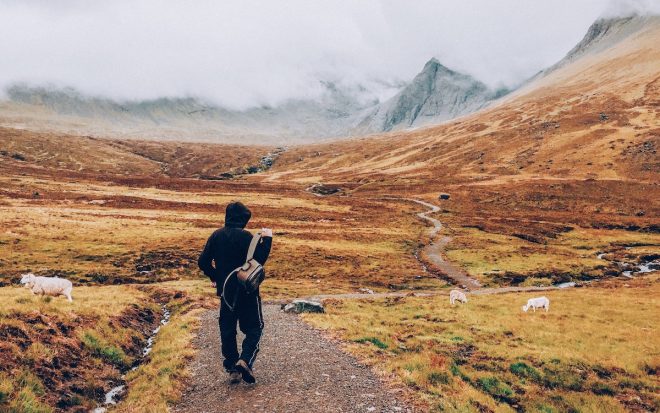 I knew those words to be true. I had lived them.

Twenty years of nonprofit service for orphans, widows, and single moms had crashed down around me at the moment my own dad and pastor unexpectedly left this earth. He was gone, and little by little, everything normal in my life began slipping away — everything but that one passion.

But while my world crumbled, my calling grew stronger. My understanding of the need deepened. When everything else seemed lost, my heart still screamed, “Fight for your calling!”

As I reached for that door at the top of the wooden steps, my stomach churned. This was not fighting. At best, it felt like a betrayal of the calling and of those I longed to serve — but I saw no other choice.

I opened the door, walked into the employment agency, and sat trembling at a desk in the back room. I signed page after page of documents I could barely read through my tears, and set out on a journey I never intended to take: finding a job that had nothing to do with my calling.

Two and a half months later, with my attentions split and my grief still raw, my ministry was barely hanging on. I sought counsel, but found little encouragement. Two leaders told me, “Sometimes we just have to give up what we love.” A third told me it wasn’t worth fighting for.

To top it all off, sharp accusations were publicly flung in my direction. They were not true, but the damage was done, and I had to find restoration on my own. I was devastated, convinced that I had failed everyone by not securing a peaceful resolution.

As I drove down the street in tears two days after that event, I was shocked to hear myself praying, “Why should I even keep trying?”

Three weeks later, my new job as a leasing agent at an apartment complex was combined with another position (double the work), and the hours were cut nearly in half. The sense of failure was overwhelming.

Your failure doesn’t define you

During all of this, I had been taking The Art of Work course. Between that prayerful conversation in my car and Jeff’s constant emphasis on pivot points, it didn’t take me long to realize where I was, and that I didn’t have to stay stuck there.

Although I would still have to take on more work, not having full-time hours at the apartment complex meant I could start rebuilding the ministry. That idea gave me hope, and I started taking steps — building a bridge, as The Art of Work calls it.

Three months later, I walked across that bridge to meet with a single mom in Burger King. She was weeping. The State was pursuing termination of her parental rights. They had brought crushing testimony against her. Some of it was true. Some of it was grossly exaggerated. Some of it was false.

Because of my own tearful moment in the car months earlier, I was able to lean across the table, look her in the eyes, and say, “Those lies do not define you. Who you are is not what people think or say about you.”

That day opened a door to work with her on a regular basis. She has grown, matured, and found new confidence over the last seven months. She has even gone back to school and started her own business.

Two months after that moment in Burger King, my ministry, the one that “wasn’t worth fighting for,” received a $5000 gift. It was enough to put down a deposit and six months’ rent for a small office, furnish the space, and offset the cost of moving the ministry out from under the umbrella of our church and establish it as its own 501c3.

Shortly after settling into our new office space, we discovered that the offices surrounding us belong to an agency focusing on single moms of meth-affected babies, as well as drug- and alcohol-related peer mentoring. We’re working on a referral plan.

In The Art of Work, Jeff stresses the importance of sharing the work. This has been an area of struggle for me for many years. I wanted to share my vision with others and wanted them to be more involved, but no one seemed interested beyond a small gift or project here and there.

One of our board members recommended that I enroll in a course dealing with partnership development. The first night of classes, I realized the course would give me the opportunity to practice many of the things I had learned in Jeff's book.

I soon found the courage to begin intentionally presenting the ministry to others. I’ve since learned the joy of seeing them get involved. We now have a volunteer heading up our clothing exchange! I’ve learned that the people I think will want to get involved might not be interested, while people I would never have considered might play an amazing role in the organization.

In the midst of all this activity, a dispute between the company I work for and the local Housing Authority led to unexpected moves for two of our Section 8 residents. Both were single moms.

After much prayer and a conversation with my manager, the ministry was allowed to help both of these women relocate by providing the moving truck for one family and moving volunteers for the other.

It’s amazing how many obstacles have “opportunity” written all over them, like the interruptions that kept me at work late today. Because of them, I was there to answer a phone call that has connected the ministry to a family who just lost their home to a fire.

It’s amazing how many obstacles have “opportunity” written all over them.

We still have a long way to go. We are not out blazing a trail with fireworks and fanfare. But we are, little by little, accomplishing our goal through simple solutions. This thing is far from dead.

Walking up those stairs and reaching for that door a year ago seemed like the ultimate sign of failure, but in reality, it was an amazing pivot point. It became an opportunity for the ministry to grow, to learn, and to serve others as much as we can — and for me to recommit to my calling.

Our ministry has now gained a glimpse of what is possible with persistence, faithfulness, and patience. We’ve seen beauty come from the ashes of a plan gone horribly wrong.

To learn more about The Art of Work go here. You can pick up a copy at Amazon or Barnes & Noble and fill out the form on this page to get some bonus videos and other fun stuff!

What unexpected challenges have you faced? How have they given you a different perspective on your calling? Share in the comments.