A lot of the time writers are just sponges… for what's around them, and so books are helpful for focusing your mind and literally putting it into words.
–Marcus Mumford

If you've never listened to the group Mumford and Sons, you're missing out. They're an English folk band with some bluegrass and rock undertones. Like a lot of great bands, they inspire me to be a better writer. 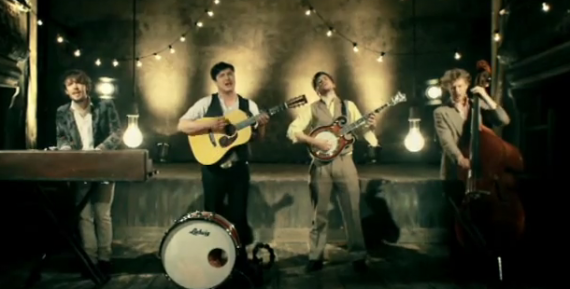 I've been listening Mumford for a while now, and it's been great to see their talent recognized more in the mainstream lately. In fact, it's hard for me to turn on the radio without hearing one of their songs.

They're one of those groups, like Coldplay, that I can listen to and instantly get inspired. I don't know what you do to get inspired to be creative, but I tend to listen to music or go for runs.

Recently, I was admiring this band and realized there were some takeaways from their music that could apply. Here they are.

1. Never underestimate the power of a well-placed expletive

There is something powerful about a well-placed cuss word that doesn't evoke the same sentiment as saying “darn” or “shoot.”

Of course, the temptation is to overuse profanity, which robs these words of their potency. When I listen to “Little Lion Man,” and Marcus delivers that powerful F-bomb (“I really f*cked it up this time, didn't I, my dear?”), I feel the failure that he is singing about. It's honest and emotive.

2. Everyone loves stories, especially epic ones

We all love a good story. When I listen to “The Cave” I am taken back to another time — a time of struggle and pain, of war and famine. I'm not even sure what the song is about, but there is this tension that unfolds musically, ultimately resolving in triumph:

I'll find strength in pain
And I will change my ways
I'll know my name as it's called again.

As the harmonized voices conclude the song, you can sense resolution. Whatever conflict the character was facing in this narrative has been overcome, and you can feel it in the music. With art, how you say something is just as important as what you say.

3. Transparency is essential to building trust

Mumford's songs are full of brokenness — sung by a man who has seen the dark side of life. They're not unrealistically optimistic, but neither are they overly pessimistic. They speak to the real hardships and struggles of life that we all face.

As a writer, I'm learning that being able to relate to my audience honestly by sharing my own shortcomings is essential to building trust.

Mumford doesn't sound like most of the stuff you hear on the radio. (I mean, seriously, who else is getting away with using a banjo as one of their lead instruments?)

And yet, they're starting to get recognized by the public. Without compromising their art or changing their style, they're beginning to be rewarded for their creativity, to the extent that they even received a Grammy nomination, performed onstage with Bob Dylan, and were recently covered by Taylor Swift.

5. People are fascinated with the divine

Mumford and Sons' songs are chock full of spiritual undertones, as is clear in “Awake My Soul”:

Awake my soul
You were made to meet your maker.

I've read interviews about Mumford not claiming to be a “Christian band” but admitting that faith is something they've struggled with, which is evident in “Roll Away Your Stone” and “Hold on to What You Believe”.

Mumford and Sons are singing about what matters — about human struggles and divine providence. And that's the aspiration of every creative — to create art that truly makes a difference.

What do bands like Mumford and Sons teach you about writing or creativity? Share in the comments.