Lately, we've been talking a lot about how to win friends and influence people. There is a right way to do this. And there is a wrong way. 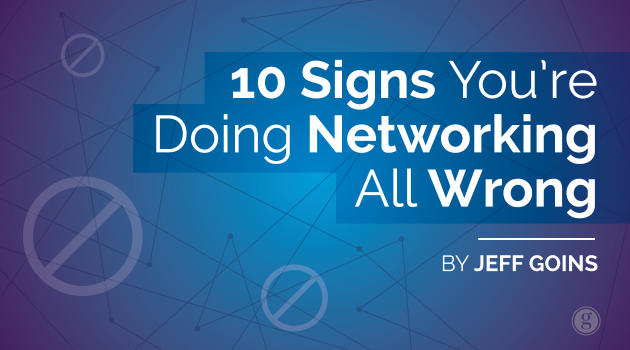 There is a patient way and an expedient way. There is a generous way and a self-serving way. So how do you know if you're doing networking all wrong?

It's not wrong to want more influence, to reach out and serve your way into more relationships. It is, however, bad to go about it the wrong way.

There is a proper etiquette to making connections, and it has nothing to do with which fork you use to eat your meal. It does, however, have everything to do with treating people like human beings.

When Augustine became bishop of northern Africa, he wept. This is the right response for anyone who steps into a position of influence. It demonstrates that your heart is postured correctly.

A real leader knows his influence is not about him; it's not a personal platform. It's a burden, an obligation. So many people seek influence without understanding this. They want a soap box. They want to be popular.

This is not how it works. Really good networking is about humility and serving others. Everything else is just sleazy and, not surprisingly, less effective.

Here are some indicators that you're doing networking all wrong:

The paradox of influence is that those who have it can easily get more, and those that lack it struggle to gain momentum.

The same can be said for friendship. Those who need friends struggle to find them, and those that can make friends have an abundance of them.

Why is gaining influence so hard?

People want to hang out with those who are fun and confident and interesting. They like people that other people like. What do you do? You have two options:

Look, nobody's perfect. We all struggle with being self-centered or awkward on occasion. What I know is this: people who are incredible at networking do the following:

I'm not saying you need to be over-confident, arrogant jerk. In fact, I'm saying the opposite.

Be humble. Show interest in others. Seek influence for the sake of making people's lives better. Don't focus on yourself. Be like Augustine. Resist choosing positional authority until it chooses you.

In the mean time, try creating really epic stuff, and see whose attention you capture.