“You cannot swim for new horizons until you have courage to lose sight of the shore.” –William Faulkner

Part of the job of a writer is to take risks, but not just the big, bold risks that can make or break a career. Often, it’s the small but significant risks that define who we become. 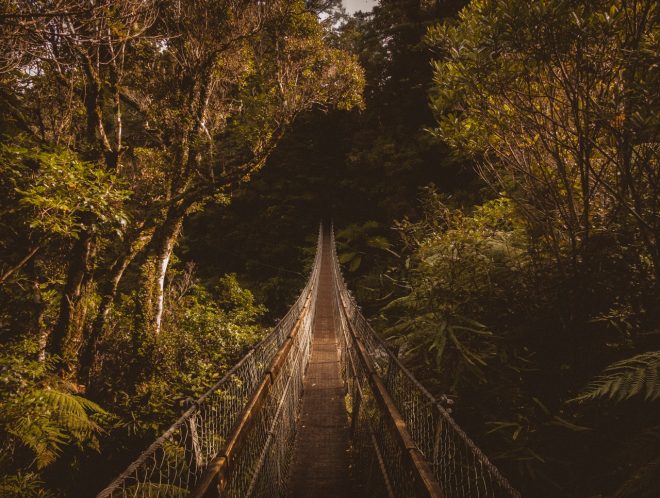 Not only do I want to share my thoughts with you in this post, but I also recorded a special episode of The Portfolio Life to expand on these valuable lessons. You can listen below, read the article, or do both.

Sometimes the things we think of as big risks aren’t that big. And some of the most significant transitions in your career won’t require you to take a leap but instead build a bridge. So which risks are worth taking, and which ones are not? Here are three regular risks you must take.

You have to risk your comfort. That’s the first risk every writer must take. This is not easy work, and you will be tempted to mail it in. Don’t. Here’s an example.

Writing a book for me is a process of pulling together ideas and and stories figuring out what they all mean. While researching Real Artists Don’t Starve, my latest book, a friend recommended I talk to astronaut-turned-artist Alan Bean. As I looked a little closer at Alan’s story, I was convinced of two things:

My initial response was this was never going to work. Alan would never talk to me. I knew it. I was certain of it. It was fact. I shot myself down before I even tried, because that was the easy thing to do.

That’s when my friend and writing mentor, Marion Roach, challenged me: “Don’t just do Internet research,” she said. “Do real research. Pick up the phone and call him.”

In other words, do the hard work.

Casting aside my self-doubt, I emailed Alan and asked for an interview. A day later, he responded with his phone number and told me to call any time. I was stunned. Risking my comfort paid off. Alan and I ended up having a terrific conversation, which you can listen to here. His story also closed out the book and continues to resonate with readers.

The lesson is simple: Don’t take the easy route. Risk your comfort, and do the hard work. It pays off more than you think.

Anytime you write a book, you’re not really sure what it’s going to be.

You have to risk rejection. That’s the second risk we take as writers. This work is not for the faint of heart, because around every corner lurks someone waiting to reject you. Agents. Publishers. Critics. Even readers. You have to pick yourself before anyone else will.

One person who applied this lesson better than most is Rebeca Flott.

Rebecca is an artist who paints old window screens. She reached out to me on Instagram, and when I heard her story, I knew it deserved to be shared. After reading my book, Rebeca latched on to the one idea that you don’t have to starve to do your best work. She went after her dream, and today she is a full-time artist.

Here’s how she did it:

As she was busy doing those things, practicing in public as I call it, someone offered Rebeca $100,000 to open up a physical shop where she could continue teaching others her art. She found a patron.

Here’s the lesson: When you risk rejection, not everyone rejects you. When decide you don’t need anyone’s permission to make your art, suddenly someone wants to help you. The universe conspires for your success.

It was when Rebeca took her art more seriously that others started taking her seriously. She risked rejection and leaned into her fear, and it paid off. Fear constrains us all, but if we want others to believe in us, we have to believe in us first. So don’t be afraid to put your passion on display for others to see. Who knows who you might attract.

Begin with the assumption that there’s a yes out there.

Don’t say no for other people

You have to risk failure. These risks, of course don’t always pay off. Sometimes, we fall on our faces, and we hit the ground. And it hurts. Still, we have to keep going. We can’t quit. The job of a writer is to persevere, even — no, especially — when we might fail.

Is it going to be easy? Of course not. You can do the hard work, display your passion, and still get rejected. And you’d think after learning my lesson from talking to Alan Bean that I’d be more comfortable with risk. But I’m not.

When I was working on the book, I wanted to reach out to a man named Rab Hatfield, the author whose book had been a major influence and in fact the basis for much of Real Artists Don’t Starve. A retired professor living in Italy, Professor Hatfield was nearly impossible to track down. His book The Wealth of Michelangelo took me six months alone to track down and cost $120.

So getting a quote from the author was important. But I knew I needed something fresh, not a regurgitated quote from The New York Times, an exclusive interview with the man himself. Still, I was unsure of myself.

I tried Googling him but couldn’t find a current email address. He had no blog. No public phone number. Nothing.

So I went to Twitter. There, I found a two year old photo of Professor Hatfield teaching a class, and I reached out to the person who had taken the photo. They said they did know the professor and would be willing to introduce me. After emailing Professor Hatfield, he sent me a prompt reply with his phone number.

The next morning, I called him on Skype, and we spoke for over an hour. “What else do you want to know?” he asked towards the end of our conversation, then proceeded to tell me all about the Mona Lisa.

It was after I stopped saying no, that I was genuinely able to get what I wanted.

Here’s the last lesson: Stop saying no for other people. You don’t know what their answer will be. Risk rejection and lean into those fears. I was able to meet these incredible people and help tell their stories but only after I dared to ask.

May you do the same.

I completely believe you can make a living with your art.

And practically speaking, you don’t need 99 people to say yes. You just need one. It’s not your job to say no for them, and your “yes” may be closer than you think. Good luck.

What art will you have the courage to pursue? Share it with me in the comments.

Previous: Alan Bean: 3 Lessons on Life and Art from the Fourth Man to Walk on the Moon
Next: The Rule of the Scene: Why Where You Live Affects the Work You Do