I've written before that every story of success is really a story of community. This was one of the central ideas to my book, Real Artists Don't Starve. You need a scene. But how do you find one? 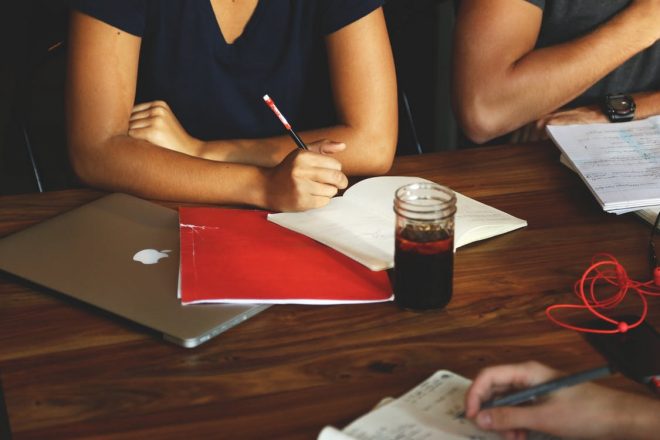 When we look at the lives of successful artists, writers, and creatives, we don't just see a collection of serendipitous moments. We see strategy. Whether intentional or not, a series of incidents and connections often allow a person's work to get the attention it deserves.

And this does not happen by accident. At least, not usually.

One of the greatest examples of this is how Ernest Hemingway moved to Paris in the 1920s to join a scene of expatriate writers and artists who had taken up residence in the Left Bank. Almost every time I tell this story, someone will ask, “But what if I can't move?”

Do you have to move across the world to find your scene? What if circumstances prevent you from doing so? Here's what to do if you find yourself in that situation.

I also recorded a podcast episode to further expand on my thoughts. You can finish reading below, give it a listen, or both.

Go where the magic is

The Rule of the Scene, as I call it, states that it's easier to go where creative work is happening than it is to will yourself to be more creative. The research on this is pretty clear: genius is a group effort, not the result of any single person's work. The concept of the solitary genius is a myth. We don't do our best work alone.

At the same time, not all of us are able to pack up our things and move across the country or the other side of globe to find our scene. Does this mean we're out of luck? Not exactly.

We need a scene. That much is obvious. But you may not have to move as far as you think. Here's how this works. If you want to do your best work, you have a choice:

Either way, you don't get out of this. You have to find your scene, even if it means you make it yourself.

Let's look at the first strategy, which we'll call “Go Join a Scene,” (see Chapter 6 of Real Artists Don't Starve for more on this). The idea here is there are certain pockets of creativity in the world that are worth tapping into. These places and unique moments in time are sometimes called “creative clusters.”

Researcher Richard Florida writes about the Creative Class, as a group of workers who are particularly drawn to areas of technology and diversity. They intuitively understand that where we live affects what we do and how we do it.

Travel writer Eric Weiner shared the same phenomenon in his book The Geography of Genius. Some places, he argues, seem to have an “it” factor, something that makes that location a hotspot for creative. And if we want to do our best creative work, we would do well to tap into these places.

One quality, according to Weiner, is that these places are unlikely — they can happen anywhere. When Hemingway sees a bunch of poets and painters moving to Paris because the exchange rate is good, he decides to follow. There, he can live on a meager budget while growing as a writer in the company of greatness. So he goes. And he finds his scene.

That's one way to do it. But of course, there is another.

Create your own scene

You can either do what Hemingway did and go join a scene, or you can create one. Let's look at that second strategy, which we'll call “Create Your Own Scene.” If one way to do your best creative work is going where creativity is already happening, the alternative, then, would be to stay put.

This, too, is a strategy. Because for every Hemingway in Paris, there's a Bronte in Haworth. Haworth, England was a small rural town where the Bronte family made their home. The daughters of a clergyman, Charlotte, Emily, and Anne grew up without much exposure to the outside world. To pass the time and to amuse themselves, they would tell stories to each other.

One day, one of the older sisters Charlotte found some poetry written by Emily, which caused the older sister to share that she, too, had been writing. Before long, it was clear that all three siblings were closet writers, and thus began a literary collaboration that would last a lifetime.

The Bronte sisters would go on to write some of the most influential works of literature in the English language, and it all began in a small village, far from the reaches of civilization. These young women didn't have to leave home to find their scene. In fact, some of them did leave only to return to Haworth because that was where they did their best work.

Sometimes, the community we need is closer than we realize.

So which should we do? Go find a scene? Or create one? It may sound like contradictory advice: if you can stay put or leave, then you really don't have to do anything.

But that's not what I'm saying. You need a scene. You need to find that place where your people are, that community you can connect and collaborate with to create your best work.

But make no mistake. This requires movement:

In my case, it meant realizing that I already lived in a city where creative work was happening. I just needed to join it. But this required action. I had to put myself out there, show up where other creative workers were gathering and make some connections.

Over time, the more I made myself available to others, the more I became a part of the scene.

If you want to find your scene, you must move. Standing still is not an option. Either move to where the work is happening or recognize where it is already happening in your back yard and start putting yourself out there. Connections create community.

How to create your own scene

You need a place to gather, a group of people to connect with, and a purpose for meeting.

This was true of the Brontes, it was true of Hemingway, and it was even true of the scene I joined here in Nashville. We do our best work in community, and those communities are found in places, sometimes the ones we least expect. Our job is to go find that scene, wherever it is. Because once you join it scene, everything changes.

Every year, Eric Gale, a member of our Tribe Writers community, comes to Tribe Conference, our annual gathering for writers and creatives. But he doesn't just show up. He takes it upon himself to put together a meet-up for other writers in the area. No one asked him to do this. He was just hungry enough for connection that he decided to create his own community.

This is how you find a scene. You put yourself out there, going where creative work is already happening — whether that's in your own town, or at a faraway event. You do whatever you can to get to where your people are. Then, you do what Eric did: you step out and make yourself as helpful as possible to others.

And if you do this well, you win.

What do I do now?

Your next steps are simple:

If you're curious about joining Eric, me, and others this year who are eager to get the attention their work deserves, check out Tribe Conference.

Click here to reserve your seat before the early bird price expires.

Do you need to join a scene or create a new one? Share in the comments.