Over the last four years, I’ve published four books, with the first being self-published. As a writer, I've continued to release projects on my own, and one of the things I’ve learned about this term, self-publishing, is that it is completely deceiving. 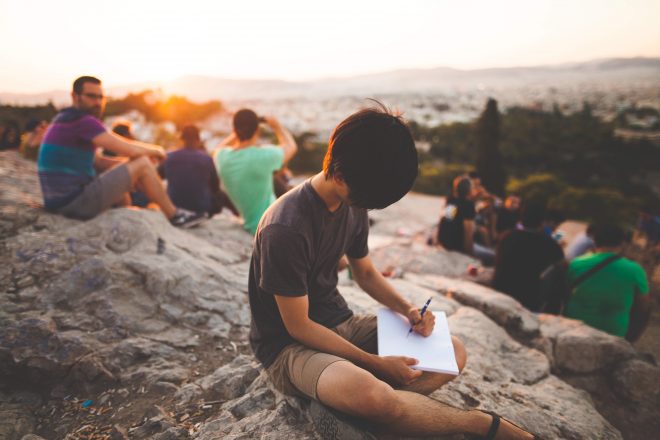 As I’ve shared before, every story of success is really a story of community. No one succeeds alone. No one.

Generations ago, when publishing gatekeepers were the only way to share your words with the world, getting published meant someone was going to take care of you. F. Scott Fitzgerald used to ask for (and receive!) personal loans from his editor at Scribners. Thomas Wolfe didn’t know how his own novel was being received until the same publisher called him with news of the early reviews.

The power dynamic was forever in the gatekeepers’ favor, and many writers were affected.

Now that self-publishing has blown up the old model, writers don’t need publishers to accept and bless their work any longer, which is a good thing. You don’t need an editor of one of the “Big 5” publishers to give you an audience.

In fact, you don’t need anybody to fulfill your dreams of becoming a best-selling author.

It’s a mistake to assume that self-publishing means you can do it by yourself. From editing your work to preparing a launch, there are countless details that go into any publishing effort, and it would be a disservice to your craft to think you can or should do it alone.

What’s worse, when you do this, you cut yourself off from the very community that wants to support your work and see you succeed.

The power of community

Truth be told, this misconception about self-publishing is one of the reasons I created Tribe Writers, my online course and community for writers who want to learn how to market and sell their work.

I knew how many authors, myself included, were confused about how to find and engage their tribes, and I was frustrated that the information I needed early on was scattered in so many different places.

Tribe Writers was my attempt to correct a persistent myth about writing — that it’s something you can succeed at alone.

The biggest danger of self-publishing is thinking you can do it yourself.

Whether your readers are targeted and wooed by your publisher on your behalf or gathered one by one through your own efforts, you cannot become a best-selling author without others.

Last fall, I opened the doors to another class of Tribe Writers. One of the students was David Mike, a cosmetology instructor from Omaha, Nebraska. (Everyone knows I respect anyone who respects the hair game.)

David had been hearing from family and friends for years that he needed to write a book. His life story included military service and prison time, drug dealing, and redemption. But does living an incredible story automatically mean you should shop it around to publishers? David wasn’t interested in that approach.

So what did he do? Self-publish, of course. And he did it the right way — with the support and assistance of others.

This past summer, David published Dishonor, one of the many excellent books to come out of the Tribe Writers community.

Thanks to the tribe he found there and beyond, he went from not even calling himself a writer to publishing a memoir that has received, in under two months, over 70 5-star reviews. He is now working on his second and third books and says it was his tribe that helped him do it.

He used the power of community to share his very personal story with the world. And it worked.

Forget what you’ve heard about lone geniuses. You cannot succeed without others.

In the Tribe Writers course, we teach writers a four-step method to get their work the attention it deserves. Through each module, the theme of community is constant. At each step of the way, you learn how to grow and engage a tribe that will read and help spread your work.

Tribe-build your way to a best-selling book

David followed the process and achieved incredible success. He’s one of many students reaping the recurring benefits of building a tribe. So my team and I reached out to him to ask what advice he had for other writers. In the spirit of community and generosity, he responded with the following six tips.

In Tribe Writers, David found an instant network of fellow writers and creatives. After taking the course, he quickly learned how powerful it is to surround yourself with people who understand what you’re trying to do. He said:

I’m not building community so I have someone to sell to. I’m doing it so that we all have each other’s support. We all need people to bounce ideas off of and tell us how we’re doing. A friend outside your writing community will just say whatever you’ve written is good, but a fellow writer can tell you exactly what you need to do and why.

It’s about helping each other.

“I published the first third of Dishonor chapter by chapter on my blog,” David says. “Once I got into the Tribe Writers Facebook group, the second two-thirds of the book got way better because I was getting regular feedback from the other writers in that group.”

There was such a difference in quality between the first third and the final two-thirds that he went back and rewrote the former.

Left to his own devices, David says he wouldn’t have gathered a launch team until it was too late. But on the advice of his editor, he decided to start a Dishonor Facebook group midway through the writing process, and the first day, 400 people showed up.

There's tremendous power in surrounding yourself with people who understand what you’re trying to do.

Writers often underestimate the scope of their own network. By the time the book was ready to publish, David had nearly doubled his initial audience, which made for a nationwide launch team that was eager to help him. Because he’d created a community, these same supporters were also his first customers and most enthusiastic evangelists.

David made a small, specific request of his first readers: “Take a selfie with your copy of Dishonor, and post it on social media.” Even he was surprised by the outpouring.

Multiple postings later, it started to look like everyone was reading his book, which helped catch the attention of even more readers. David’s request worked because it was mutual: readers got to share a bit of themselves with their followers, and David got the benefit of grassroots publicity.

This is the give and take of a healthy community.

If you’re from Omaha like David, you may have seen the review for Dishonor in the Omaha World Herald a few weeks ago. Or maybe you were present at his launch party, where free books and good coffee were part of the local celebration.

David’s launch was so community-centric that he is now leveraging the success of the book into speaking opportunities at local churches, men’s groups, and schools. He dreams of getting physical copies of the book into prisons, where it can help and inspire the group he used to count himself a part of.

In the acknowledgments section of Dishonor, David wrote that it was my self-published book, You Are a Writer, that inspired him to become an author. But that’s giving me too much credit. I would argue that he was a writer all along and that all he needed — all any of us need — is a community to affirm, challenge, and support us along the way.

So if you’re struggling to find your tribe — that audience that eagerly awaits your message — do what David did and build a community right now, right where you are. It just might surprise you.

It bears repeating: Every story of success is a story of community. Make sure you find yours.

FYI: Tribe Writers isn’t open to new students just yet, but I’m putting the final touches on a new free book and training series for writers who want to tribe-build their way to a best-selling book. Stay tuned for more.

David’s book, Dishonor, is available on Amazon. You can find him at dilemmamike.com, or on Twitter @dilemmamike. Thanks for being part of our Tribe Writers community, David, and for inviting all of us to be part of yours.

Have you found your community? Share in the comments.