It's a dangerous business going out your front door.
—J.R.R. Tolkien

A story doesn't begin with exposition. It doesn't start when you see the title on the screen or when the main character arrives on the scene. A story begins with conflict. 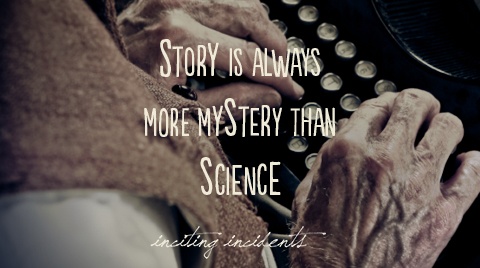 Without conflict, you don't have a story. You have a reality show. Go ahead and tweet that, I dare you.

Until Darth Vader storms the ship or Dorothy gets swept up by the tornado, you don't have a tale worth telling. It might entertaining or interesting, but it's not a story.

It all comes down to a moment. When Harry Potter finds out he's a wizard. When Katniss steps in to die for her sister. That's when a story really begins: when things start to get uncomfortable. Everything else is just setup.

Screenwriters call this catalytic moment an “inciting incident.” It's when things start to get interesting, when your tiny tale gets messed up by a larger story. And the same is true for life.

What causes a character to grow

We all need change. To be molded and shaped into the people we're supposed to be.

We know this is necessary in movies and novels and even sitcoms. It's a good thing for a person to learn something by the end of the episode, to be a better version of themselves. But when it comes to our lives, we forget this, don't we? We think somehow it would be good to just stay the same.

So we run: away from costly commitments and hard things. And the tragedy is these are the very things that would change us and cause us to grow.

Then something happens. This is the nature of story. Something unexpected has to occur. Someone has to be jolted in order for a tale to be set into motion. I call this getting wrecked. You might call it something else. Regardless, there has to be a revelation of something more than a character's little plans. That's how heroes are made.

We are both uncomfortable and excited by this idea, that we could be save the day. But isn't this what life is teaching us, what God wants us to learn? That we have a part to play in a great epic? That there is brokenness to be healed and wrongs to be rights and we hold the keys to fix it?

Perhaps the world is waiting for us to do just that.

What this means for the real world

This can come across sounding WAY intense, when in reality it can mean something very simple. G.K. Chesterton said an adventure is an inconvenience rightly considered. In other words, we find our roles in the story by stepping into discomfort.

This could mean a trip around the world or a walk around the block; it depends on your context. What it doesn't mean is you stay sitting on the couch.

Your story begins when you take the initiative to be inconvenienced, to be changed. And of course, there's always the option that if you don't make that choice, it just might be made for your. So wouldn't it be better to be a little proactive?

Where we go from here

I don't know where you are in finding your role in the story, but if you need a little nudge, here are three choices you could make today:

Of course, this isn't the official three-step process to finding your calling — there is no such process — but it's a start. And for many of us, that's enough.

If you're interested in this sort of thing, check out the book, Inciting Incidents. It's a collection of real-life stories, and I had the privilege of contributing one of mine as the first chapter. You can also hear a special radio program in which I do an exclusive interview, along with some other cool people, here.

Have you found your role in life's story? What great conflicts have you had to face? Share in the comments.