In the past six months, I've done something I never thought I'd do — I've attended a lot of conferences. And it didn't kill me.

So far, I've been to Dave Ramsey's EntreLeadership, Catalyst East, Dream Year Weekend, re:create, the National Youthworkers' Convention, and the Dynamic Communicators Workshops. And I have several more on the docket over the next several months.

(Or at least, I thought I did)

Turns out, not all of them are a complete waste of time. It was people like Randy Elrod who restored hope for me in the idea of a bunch of people getting together to celebrate an idea and actually do something as a result.

For some of you, this is nothing novel. You've been attending great conferences for years and getting a ton out of them. But not me. I've always been skeptical of conferences. And I've not been disappointed.

Only recently have I opened up to the possibility of conferences not being a total waste of time. And I've been delightfully surprised.

Conferences are being redeemed

There are several people out there who are doing this thing right. They're not just talking at you; they're interacting with you — challenging and conversing and even creating in tandem with the audience.

It's not a conference as much as it is a conversation.

And I like that. It resonates with this age of creativity and Wikipedia and crowd-sourcing. The days of the megaphone and platform are over; it is now time for events that inspire collaboration and synergy.

A conference worth attending

Ben Arment is someone who is leading a tribe of leaders and innovators from the “creative class” through excellence-driven work, grassroots networking, and real relationship.

I like Ben's style; it's powerful and inspiring, but at the same time, humble and unassuming. 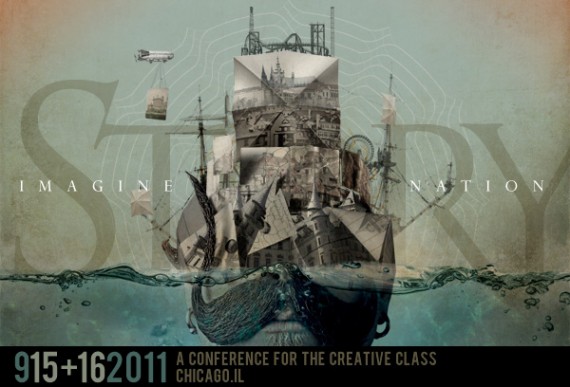 When I attended one of his events earlier this year, I was hooked. I was convinced that I had to get to his annual STORY Conference in Chicago. Through the generosity of a complete stranger, I am doing just that.

And while I've never been to STORY, I'm hoping to see you there. A lot of my friends will be there, and the speaker/presentation line-up is amazing.

Call it a bit presumptuous, but I think we need more events like this — more conferences and workshops that celebrate creativity, that push the envelope of the status quo and call us to boldly dream and imagine.

Nobody's paying me to say this. I just believe in the idea of having more creative conferences. For far too long, this space has been occupied predominantly by CEOs and entrepreneurs and tech geeks. And that's totally fine.

But what about the actors and painters and writers and photographers of the world? What do we have for them?

I asked Ben a few questions about this event. Here's our brief interview:

Jeff: What is STORY?

Ben: STORY is a gathering of the creative class in ministry — the artists, photographers, innovators, filmmakers, writers, musicians and dreamers. Our goal is to fuel their work, equip them, inspire them and give validation to their work.

J: How did it begin?

B: Conferences have always shaped my life and ministry, but they were becoming too much like preaching exhibitions that featured the usual cast of characters. But creatives in ministry want to hear from other practitioners. They want to learn from multiple disciplines. They want to be stretched and inspired.

J: Who is it for and why should they go?

B: STORY is for those who love the creative aspects of ministry. They can be artists or producers. Curators or creators. Practitioners or those who simply appreciate it.

J: What can we expect this year?

B: We're incorporating a lot of theatrical elements in year's event, but we're going to fuse it with great content from people like Ann Voskamp, Ed Dobson, Ian Cron, and some industry types such as the leading title sequence creator in Hollywood, Kyle Cooper, the producer of The Silence of the Lambs, Ed Saxon, humanitarian photographer Esther Havens and others.

The best rate for the conference ends today at midnight EST. Visit StoryChicago.com to get the advance rate, or you can just jump straight to the signup page to register today.

Again, just to be clear; nobody is paying me to say this. I just hope to see you there!

Do you hate conferences? Has your view of them changed at all recently? Join the discussion in the comments.