The science of skill acquisition has been the focus of a number of recent studies and books. As it turns out, we are born with very few, if any, natural talents and skills. Excellence is borne not of any particular innate ability, but of practice. In other words, you can be good at whatever you want. 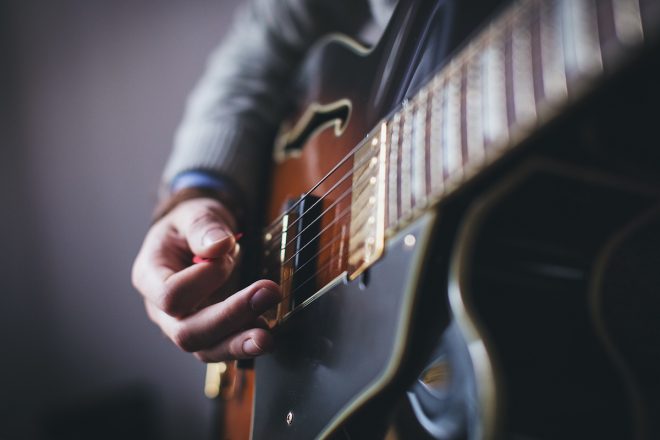 Whatever you want—therein lies the rub.

In high school, I picked up playing the guitar. My dad taught me, so it was a natural progression from father to son, and after learning tablature (an easier way to read and play music for guitarists), I started learning songs I’d always wanted to play. After six years of practice, I was pretty good. But I also hit a plateau of talent, one I knew I couldn’t exceed.

My abilities extended to being able to play all the major chords, barre chords, and a few simple licks. That was about it. No soloing, improvising, or anything too advanced. And frankly, I was comfortable with that level of talent. Why did I need to get any better? For six years, I stayed at about the same level of proficiency—until I started touring.

The year after college, I traveled with a band for a year, playing at least one, if not a few, shows per day. In what little spare time we had, I practiced playing guitar. And as a result of being onstage every day for the greater part of a year, I got better. Not just a little better. I was a different guitarist. By the end of the year, I could do things on the guitar I never imagined were possible.

Thinking my talent had a limit, that I was born to only achieve a certain level of skill, I had grown comfortable with what seemed a reasonable amount of talent. I thought I couldn’t get much better, that there was no way I could be as good as any of my guitar-playing heroes or more talented friends. And I was wrong.

By the age of twenty-three, I was now the best I had ever been at guitar and finally believed I could be as good at it as I wanted. There was just one problem:

I no longer wanted it.

Why there aren’t more stars

In all my reading and research, I’ve never found anyone to answer this question: If it’s possible for anyone to acquire any skill, why don’t more people do it? Why don’t they improve or get good at things they’ve always wanted to do, like cooking or sports or playing the piano?

The first answer, of course, is that it’s difficult, much harder than people realize, and requires an incredible amount of discipline. It just takes time and effort, which most people don’t have or aren’t willing to give.

But the second answer, the one I don’t hear researchers or psychologists address nearly enough, is one of motivation. That’s the other side of the issue. If I can do anything, what makes me choose one pursuit over another? It has to come down to desire, to passion, to what truly motivates you.

For me, I realized playing guitar wasn’t something that I wanted to fully dedicate myself to. It was a hobby. To treat it as anything other was to misplace my passion and disregard what my life was trying to tell me.

As I looked back on my story, on two decades dedicated to words and the craft of writing, I realized my true calling was to be a writer. And in some ways, music was an early shadow of that writing career to come.

Recently, I spoke with a group of high school seniors and shared with them some of my thoughts about what it takes to succeed in the world and how to find that thing you were meant to do. But in a nutshell, what I told them was this:

But all that begins with discarding this unhelpful idea that “some people are born with it.” It's just not true. Certainly, there may be some amount of natural talent for some abilities. But as Geoff Colvin pointed out in his book Talent Is Overrated, if talent does exist, it doesn't really matter. In an article for Fortune, he wrote:

Because the truth is just about anyone can get better at just about anything. So the real question is if you spend thousands of hours and something like a decade practicing your craft, will it be worth it?

Yes, you can be good at nearly anything. Which should cause us to be careful with where we focus our attention and our practice. That last thing you want in life, to paraphrase Thomas Merton, is to climb a ladder only to realize it was leaning against the wrong wall.

To learn more about finding the work you were meant to do, check out my best-selling book, The Art of Work.

What skills are you working on? What is holding you back from getting better? Share in the comments.