[specialbox]Editor's note: This is a guest post from Ally Vesterfelt. Ally is a writer and speaker who lives in Nashville. Follow her blog and connect with her on Twitter @AllyVest.[/specialbox]

I’ve wanted to write a book my whole life. But it wasn’t until exactly a year ago that I decided I was going to do it. 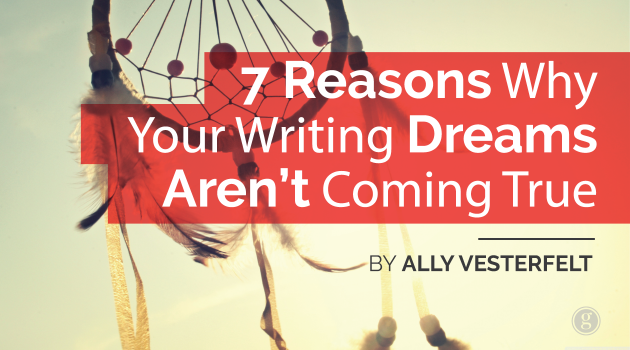 At the coaxing of friends and family I realized I couldn’t keep waiting, hoping that my writing dreams would “happen” to me. I had to get out there and do something.

So my friend Sharaya and I quit our jobs, sold everything we owned, and decided to drive my Subaru across the country. Our goal was to visit all 50 States. She would play shows along the way, and I would keep a blog and write a book about the experience.

Six months later, we had finished the 48 continental states and returned to Portland. We still had two states to go: Alaska and Hawaii. But we were out of energy, ideas and money. Worse, I still had no idea how I was going to complete my book. There is nothing worse than pouring your heart and soul into a plan, looking at how far you've come and realize that you aren’t going to make it.

Maybe you you’ve always thought about writing a book, but you've never taken the leap. Or maybe you’ve reached a block, and it doesn’t seem like you are going to make it. Regardless of where you are, here are seven reasons I’ve learned the hard way for why you may not be seeing any progress.

1. You’re stuck in a boring routine

If you do the same things every day, you won’t ever write anything amazing. This is tough for me, because I find comfort in a routine.

Sometimes we get so attached to our routine that we forget that it hardly ever produces inspiration. Despite what Hollywood suggests, dreams almost never happen to us. We have to get out there and do something.

2. You’re trying to do too much too soon

The problem with getting out there and doing something is that you want to see fast results and you’re willing to do just about anything to make that happen.

You’ll wake up early, stay up late, skip meals, ignore phone calls, run 100 miles a day — whatever anyone tells you will work — but ultimately, you’ll burn out before you ever see the finish line.

If we want to see our writing dreams come true, we have to be willing to see progress as incremental and to celebrate small victories.

3. You aren’t willing to lose everything

Don Miller said it best when he said,

4. You need to check your motivation

If I’m honest, I have to admit that at times my motivation can get a little crooked.

Sharaya and I encountered all kinds of obstacles while on the road (our car broke down in Wyoming, for example, and we had to buy a new one), but those obstacles fueled my writing.

The times when my writing felt the most flat or stilted were always when I felt dangerously selfish. Even though many good stories are “about” the author, the best stories work to serve and connect with others.

Maybe you think your plan is failing, but when you look at it, you realize that you don’t actually have a plan. You have no idea what you want to accomplish or how.

Do you want to publish a book? Do you want to work for a magazine? A newspaper? It isn’t surprising that a lack of direction (in anything) would make us feel directionless. If you begin without a plan, you’ll end up writing a lot, but ultimately you won’t accomplish much.

6. You’re trying to do it alone

When I find myself trying to do something without any help, it’s because I’m trying to prove something to someone. The problem is that I usually end up proving that I’m prideful. And a failure.

The plans I try to execute all by myself almost never turn out as well as expected.

On the contrary, the most meaningful, satisfying, thrilling accomplishments of my life wouldn’t have been possible without help from experts around me, my family and friends, and ultimately God.

7. You’re giving up on the dream before it's time

It’s been a year since I “gave up everything” to follow my dream. The most important lesson I’ve learned as I’ve traveled is that sometimes what feels like failure isn’t failure at all. It is just re-routing.

In fact, right now as I write this I’m sitting in Anchorage, Alaska — my 50th State.

I’m looking out the window at snow-covered mountains, thinking about how life is full of peaks and valleys, and about how sometimes we just have to be patient — or keep moving — when it feels like we’ve failed.

Sooner or later we’ll get to the good stuff.

What about you? What has kept you from accomplishing your writing goals? Any advice who those who are stuck right now? Share in the comments.