It was nearly midnight when I desperately tweeted to my 300 precious followers, “Does anyone have any sort of literary agent connection they could hook me up with?”

I had little to no idea how to go about getting the book burning inside me published. It felt impossible to get a publisher to bat an eye at little ol’ me. Because really, I had little to no platform and in order to win the lottery of a traditional publisher, I needed a platform.

None of my blog posts had gone viral.

I had been blogging for six years and had 56 dear subscribers.

I felt really successful when a single blog post had over 100 views.

Platform? What is that? Surely someone will just notice me.

Though my online community was small, I still had countless people asking me when I was going to start writing books. I wanted to have started yesterday, but I didn't know where to begin or if I could start with so little of a following.

Nine months after tweeting that desperate request, my book This Undeserved Life was released. It became a bestseller in six different Amazon categories, sold over 500 copies the first week and 1000 copies the first month. It remained number one in the Family Health and Adoption category for most of its release. Within 3 weeks it had over 50 reviews on Amazon.

I have since had dozens of readers reach out and ask me about my next book. I have a traditional publisher inviting me to draw up a proposal for my next book. I have had requests to create and offer a course or coaching on various topics. To some, these numbers may be miniscule. To me, they are both mind-blowing and humbling.

In January 2017, I started my email list at a whopping zero when I transferred my website and lost my dear, dear 56 committed community members.

My goal was to build a list of 1000 subscribers by release day — September 18.

To me, this goal was big: I am a full-time photographer, a full-time work at home mom to two toddlers (both under one-year-old at the time of starting the book), and a wife to a full-time unpaid graduate student. And we are involved in church and community events.

My time to give my book and online community (platform) building was at zero, but I moved around priorities and worked my butt off. The goal was met. But not without hard work, determination, and belief in myself and my message.

Have I yet mentioned I began writing this book with two babies under one-year-old as well as a growing photography business? Just want to make sure that is clear: I am not sitting around with tons of time to pursue this, just as you aren’t. 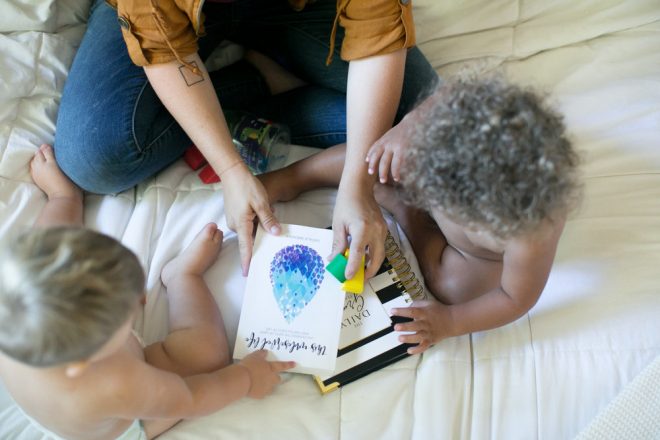 So, how in the world did little ol’ me, a blogger of seven years with a minuscule platform — can I even call it a platform? — become a best-selling author nine months later?

Writing This Undeserved Life was a painful, difficult labor of love and it followed many years of unsuccessfully creating the online community I had hoped for. Let’s dive into the process.

It all began with grabbing ahold of my identity as a writer.

I grabbed ahold of it tightly and began calling myself and acting like a writer.

A mental shift happened: I began to take myself seriously.

Since reading Simon Sinek’s Start With Why: How Great Leaders Inspire Everyone To Take Action, I knew the importance to start with why.

Why did I want to write this book? Why did I think the world needed it? Why is this book anything different than what’s already available?

For the longest time, I heard the term “self-publishing” and scoffed. I shook my head with a smirk, ignorantly, not even wanting to adventure what that meant.

Self-publishing sounded weak, illegitimate, and like something someone desperate would do.

Setting a budget. I talked with a few people, one of them being Jeff Goins, and asked their advice on a budget. Mine was small. In fact, we had zero extra money to funnel towards this book.

I was advised that a nice budget was around $3,000. This was more than we made each month, because that’s where we were at. But I trusted my advisors who’d walked before me and knew it was not going to be one giant sum of $3,000. I picked up extra freelance writing and photography jobs to help.

At the end of the day, I just had to do it. Here were the steps I took to write and self-publish This Undeserved Life, in nine months:

1. I just started doing it

No one is motivated to run a marathon before they start running. Maybe they are, but they’re crazy. When I was training for the Portland Marathon, beginning every training run was difficult.

It wasn’t until I started doing it that I gained motivation.

This was the same for writing my book: I knew there was so much work ahead, but I knew it wouldn’t happen over night.

I simply started showing up and doing the work.

I honed my voice and began writing more consistently on my website.

Creating a blog calendar to post at least once a week helped.

I set out to use my website as a place to interview other authors in my genre who I admire.

I sent emails and explained to them why I loved their book(s), how I've implemented their advice or tips, and asked if I could do an interview and book giveaway.

Most said yes, others said no. I conducted interviews via phone, Skype, and email.

After I read and heard how incredibly important email lists are, I began putting a good amount of energy into creating a safe community.

I created a grief guide ebook, Wholeness Despite the Brokenness, and offered it for free to anyone who wanted to download it. I also created an adoption fundraising guide, Financing Adoption with Fundraising.

I found a groove sending out emails to my dear community every other week.

I love this community; they helped me pick my title, my author photo, and more. I want to give my community only good and valuable things.

5. I wrote my manuscript

While doing these steps and chipping away at everything I could, I was also working on my manuscript. In Bird by Bird, Anne Lamott refers to the first draft as the shitty draft.

I cannot tell you how right she was. My first draft made my eyes bleed. I rewrote and erased and rewrote the next draft.

The important thing was: I got it out. I wrote the first draft (and then the second and third…)

6. Set deadlines and stick to them

In the beginning stages of writing my manuscript, I set deadlines.

I had to communicate well with my editor and designers, and we created a great timeline.

We were late here and there, but we worked hard and made up for lost time. Sometimes our deadlines were slightly late; they were never missed. I’m proud of the work we did in such a short time frame.

I chose a release date and worked backwards.

Deadlines to think through and process are:

I created a three-tier influencer list. These were people I wanted to write an endorsement, and give me a shout out or two.

My first tier was names of people who I knew would say “yes” to reading and endorsing my book. A few were writing and podcast friends, one was a best friend, and the rest were people on my email list.

My second-tier list were people of whom I wasn't sure would say “yes” to endorsing my book, but I thought might. Most of them were influencers of sorts, whether a popular blog or podcaster or author.

My third-tier list were people who I highly doubted would respond to me, but would make my year if they read and endorsed my book.

I began with tier one: sending clear emails, asking them to read my book, and write a few lines to endorse it. This would be used either for the inside the book, or my website. I gave a deadline. When they responded with “yes,” I sent the PDF immediately.

Once I had a couple, I wrote to each individual influencer on list number two. They were similar emails, but specific to each influencer. I told the author, podcaster, speaker — whatever their respective title — why I was thankful for their work, and how I had used their advice. Then I shared two sentences about my book, along with an endorsement I had received. I asked if they'd be willing to read it and do the same. When they said “yes,” I sent it right away with the deadline. When they said “no,” I asked if I could send them a copy of my book to read for a giveaway or shout out.

I did this with the third tier as well. Each person who responded gave me their address. So even if I didn't receive an endorsement, I have permission to mail them a copy of my book to share on their social media.

I also registered my manuscript for copyrights, purchased ISBNs in a ten-pack, and bought a barcode.

Nothing in my life that has been successful has been done alone. I knew I needed a community, and specifically the community I had been working hard to create and build.

I set up a Facebook Group to invite readers to help me launch This Undeserved Life. I gave everyone the manuscript digitally and asked their help on finishing touches of the cover.

This group remains a strong support network: I have loved the community built around This Undeserved Life through that group.

Tim Grahl has an entire podcast series and website that guides you on how to successfully launch a book. I listened to the entire series twice.

I set up pre-orders with bonuses and a special price. These are incentives to buy the book now.

When the day came, I uploaded the final pieces of my book — cover and manuscript — and hit publish.

It is now available on Amazon and has been sold across the globe.

I believe in the message of This Undeserved Life.

There have been purchases from multiple countries and continents, and not because I'm someone fancy. I chose to do the hard work it required.

You don’t have to win the lottery to publish your book.

I believe in you. Do you?

What book do you want to get out into the world? What are you doing to make it a reality? Share in the comments.